Oldest writing about teachings of Confucius found in Japan 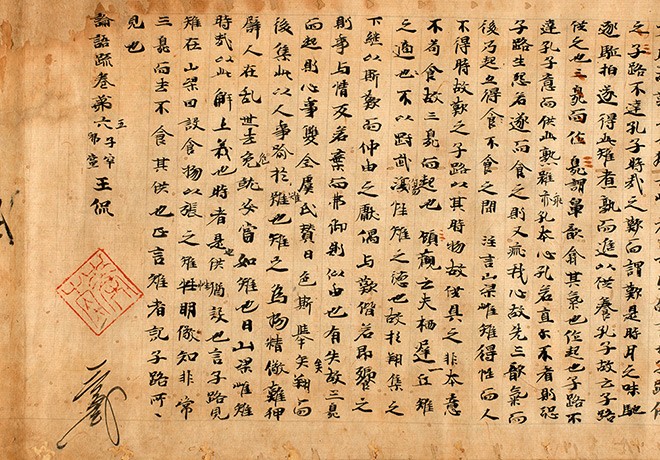 The manuscript of a compilation of commentaries on Confucian teachings produced by Chinese scholar Huan Kan (488-545) bears a mark suggesting ownership by the Fujiwara clan. (Provided by Keio University)

A manuscript of commentaries about Confucianism written apparently between the sixth and early seventh centuries in China was confirmed in Japan, a discovery one scholar described as “invaluable.”

It is believed to be one of the oldest of any religious teaching written on paper, except for those of Buddhist scriptures, found in the country.

Researchers at Keio University and other institutions say the writing is also most likely the oldest among manuscripts of commentaries on the Confucian Analects that have been handed down at temples, shrines or homes.

The Confucian Analects, compiled by disciples after the death of the philosopher (ca 551 B.C. to ca 479 B.C.), is a collection of sayings and dialogues on his views on morality, education and politics.

Manuscripts dating from about 50 B.C have been unearthed in China and North Korea.

The recently discovered writing was apparently brought to Japan by a Japanese emissary.

The manuscript is a compilation of commentaries, known as Lunyu Yishu (the elucidation of the meaning of the Confucian Analects), put together by Huang Kan, a Confucian scholar of Liang (502-557), during the Northern and Southern dynasties period.

All manuscripts of Lunyu Yishu had been lost in China by around the 12th century, according to experts.

The Analects had since served as a system for teaching and learning for succeeding Chinese dynasties through the Qing Dynasty (1644-1912).

It also wielded enormous influence on Japanese society and culture, becoming required reading at schools across Japan that nurtured samurai warriors during the Edo Period (1603-1867).

Teachings of Confucius have been propagated in Chinese society through the Confucian Analects as well as books containing commentaries about it.

Researchers consider the books on the commentaries as part of the Confucian Analects in a broad sense.

The manuscript discovered in Japan is expected to provide scholars with significant clues into the history of exchanges between Japan and China in philosophy and other realms.

The manuscript concerns Vol. 5 of Lunyu Yishu. It consists of 20 papers pasted together in the shape of a scroll measuring 27.3 centimeters long.

Based on the shape of the characters, the team concluded that the manuscript was most likely written between the Northern and Southern dynasties period and the Sui Dynasty (581-618).

They also believe it was brought to Japan through Japanese missions sent to the Sui Dynasty and Tang Dynasty (618-907) in China.

The manuscript bears a mark showing that it was in the possession of the Fujiwara clan, a highly influential family with close ties to emperors during the Nara Period (714-784) and the Heian Period (794-1185).

Written accounts stated that the manuscript was kept by a court noble assigned to handle official documents in the Edo Period.

But it had since remained unaccounted for.

Terukuni Kageyama, professor emeritus of the history of ancient Chinese philosophy at Jissen Women’s University, said the discovery is "invaluable".

“The photo of the ownership mark and handwritten monogram on the manuscript are almost identical to those on ancient Chinese historical records in the collection of the Tokyo National Museum,” he said. “If the authenticity of the manuscript is established, it will be a discovery equal to a national treasure.”

Until the recent discovery, the world’s oldest manuscript of the Confucian Analects originated from the Song Dynasty between the end of the 12th century and early 13th century. The oldest one in Japan dated back to the latter part of the Kamakura Period (1185-1333).

The newly found manuscript is scheduled to go on display at the Marunouchi main store of Maruzen Bookstore in Tokyo from Oct. 7 to Oct. 13.