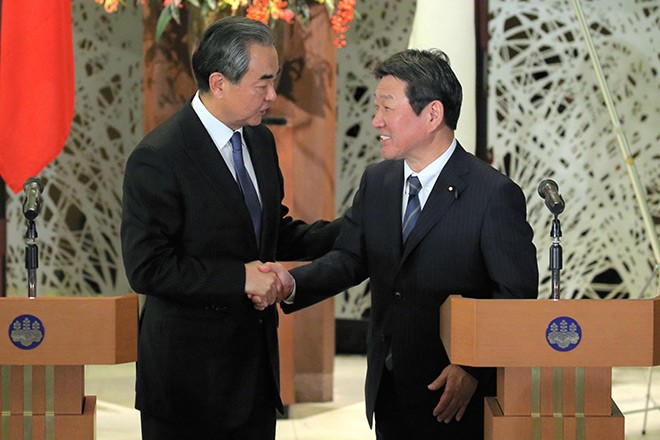 BEIJING--Chinese Foreign Minister Wang Yi will likely visit Japan as early as October to meet with his Japanese counterpart, according to a Chinese diplomatic source.

Japanese and Chinese government officials have started coordinating the visit, the source said.

Wang, who is also China’s state councilor, and Japanese Foreign Minister Toshimitsu Motegi are expected to discuss a resumption of mutual visits by business travelers between China and Japan, which have been stalled due to the COVID-19 pandemic.

During a phone conversation on Sept. 25, Japanese Prime Minister Yoshihide Suga and Chinese President Xi Jinping agreed on Wang’s early visit to Japan to discuss a range of issues between the two countries, according to the source.

Wang will be the first senior Chinese government official to visit Japan since the inauguration of the Suga administration in mid-September. He is also likely to meet with Suga.

China is hoping to sign a deal on fast-track entry procedures for business travelers with Japan and accelerate negotiations for the Regional Comprehensive Economic Partnership, a free-trade pact.

Beijing is also eager to start coordinating a state visit to Japan by Xi that was initially scheduled for April, but postponed due to the pandemic.

In Japan, however, some within the ruling Liberal Democratic Party are opposing Xi's visit due mainly to rising tensions between the two countries following frequent intrusions by Chinese Coast Guard ships into Japanese territorial waters off the disputed Senkaku Islands in the East China Sea.

Suga told reporters after the Sept. 25 phone conversation that no specific mention was made of Xi’s state visit.

“That means it (Xi’s state visit) will be discussed between Beijing and Tokyo,” said the Chinese diplomatic source. “We need to directly confirm the Japanese government’s stance over the matter.”