Petition calls for ban on pedophile teachers getting licensed again 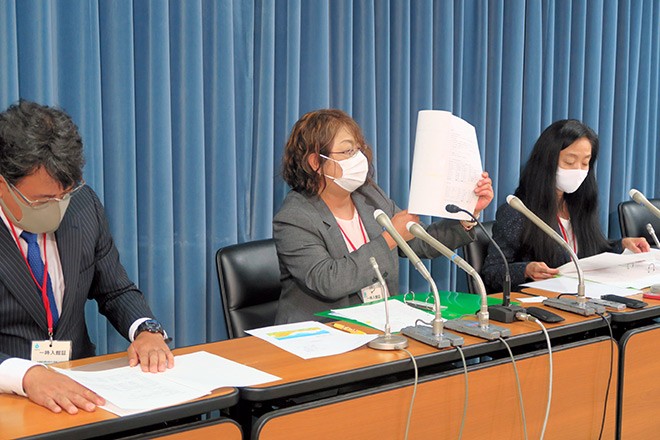 Parents at a news conference held in Tokyo on Sept. 28 urge the education ministry not to reissue teaching credentials to pedophiles who were dismissed for committing an obscene act against a child. (Satomi Sugihara)

More than 54,000 parents signed a petition calling on the education ministry to stop reissuing teaching credentials to those dismissed for committing obscene acts against children.

“The recidivism rate for sex crimes is high,” said the Sept. 28 petition by a Tokyo-based group mainly made up of 22 people, including parents who filed lawsuits over incidents in which their child was a victim of an obscene act by a teacher.

Under the existing system, local education boards can access a database to check the history of teachers dismissed for committing such acts and had their teaching credentials revoked. But it only goes back three years.

The parents are incensed that a teaching credential revoked because of dismissal can be reacquired after three years.

Earlier this month, the ministry announced it will extend the browsing period on the database from three years to 40 years starting from 2021 so schools can easily root out teachers with such a history during the hiring process. The extended period is from the date of the initial search.

Masako Gunji, a mother who signed the petition, said the new extension will not be enough to stop sexual predators at schools.

“We want to make our voices heard to deter sexual abuse that has been occurring at schools around the nation,” Gunji, 52, who co-heads the parents’ group, told a news conference.

The group started collecting signatures for the petition from September. More than 50,000 people signed within a week.

Gunji said the group hopes the petition movement will help “children themselves realize that they are victims (of sexual violence).”

According to the ministry, 231 teachers at public elementary, junior high and senior high schools were dismissed in fiscal 2018.

About 70 percent of them, or 163, were dismissed because of an obscene act. Both figures set new records, the ministry said.

Adding other types of reprimand such as suspension, pay cut and admonitory warning, the number of disciplined teachers was 282, about 1.7 times higher than 10 years ago.

In nearly half of the cases, or 124, a victim was a pupil or student who attended the school where the reprimanded teacher worked.

Children sexually abused by a teacher invariably suffer scars, both physical and psychological, for many years, say experts, noting that such behavior constitutes a total abrogation of trust on the part of the teacher.

Ikuko Ishida, 43, who accused a male teacher of sexual abuse when she attended junior high school, said during a hearing at the Tokyo High Court on Sept. 24 that he kissed her and committed other obscene acts even after she graduated and was 19 years old.

Ishida said she felt powerless to stop the teacher and did not realize she was a victim of a sex crime.

“It cannot be justified that the perpetrator is still working as a teacher,” she said. “I didn’t want to continue living while remaining silent (about the incident),” Ishida gave as her reason for speaking up now.

She contended that teachers who take advantage of their positions to commit such acts negate their “freedom of choice in employment.”

The ministry has instructed local education boards to terminate any teacher who commits an obscene act with a minor.

The Education Personnel Certification Law established in 1949 has a provision that a dismissed teacher who lost his or her teaching credential can apply to a prefectural education board once three years have passed and obtain the credential again.

The same applies to children’s nurses, except that the waiting period is even shorter, just two years.

It has proven disarmingly easy under the existing system for a pedophile desperate to keep the past secret and get a teaching job in a different area.

Sharing information among education boards has been a challenge for years, according to the ministry.

Any teacher who receives disciplinary dismissal with the loss of teaching credential will have his or her name and the date that the certificate was terminated published in an official gazette.

The ministry in 2018 created an “information search tool” for the gazette and made it available to prefectural education boards and others as a reference in hiring.

The ministry requires each education board to sign and consent to manage such “sensitive private information” carefully.

Starting from November, the system will track records dating back five years. In February 2021, the ministry plans to expand this to 40 years.

However, the decision to hire a certain person based on the database remains in the hands of each education board.

Moreover, the gazette, which forms the foundation of the database, does not state reasons for dismissal. So even with the information search tool, it is impossible for education boards to know if someone was dismissed because he or she committed an obscene act.

For these reasons, the parental group and those who signed the petition urged the ministry to revise the law to prohibit known pedophile teachers from obtaining teaching credentials again.

“The system requires a fundamental review and the ministry is discussing possible legal issues and other aspects in order to do so,” education minister Koichi Hagiuda said at a Sept. 15 news conference.

Chikako Morimoto, a lawyer who specializes in school-related legal issues, recognizes that the issue involves “a discussion on the freedom of choice in employment and the possibility of behavioral correction.”

“But we need to put children’s protection at the forefront from the point of public welfare and revise the law to ensure that (predators) will not be able to renew their credentials again,” she said.

(This article was written by Satomi Sugihara, Ryo Miyazaki and Azusa Mishima.)