OLYMPICS/ Olympic torch relay to start on March 25, 2021, in Fukushima 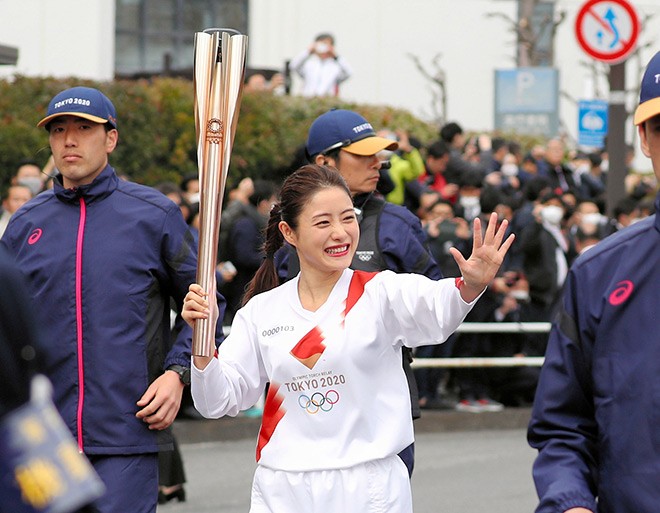 Actress Satomi Ishihara runs with a torch in a rehearsal in Hamura on the outskirts of Tokyo on Feb. 15. (Asahi Shimbun file photo)

The Olympic torch relay for the Summer Games next year will start on March 25, according to the new schedule announced by the organizing committee.

That keeps the relay largely in line with the original timeline planned prior to the Olympic Games being pushed back by a year, but changes the dates by a day.

The torch relay for the 2020 Tokyo Olympics will kick off in Fukushima Prefecture, with a member of the Japanese women’s national soccer team that won the 2011 FIFA Women’s World Cup serving as the first runner, the Tokyo 2020 Olympics and Paralympics Organizing Committee said.

About 10,000 people are expected to join the relay, which will pass through 859 localities across Japan over nearly four months through to the opening day of the Olympic Games in the capital on July 23.

The Olympic flame-related events for the Paralympics will be held from Aug. 12 to Aug. 20, according to the schedule.

The torch relay for the Paralympics will start on Aug. 17 in Tokyo and other prefectures that will host competition venues.

The Olympic flame for the Tokyo Olympics is currently on display at the Japan Olympic Museum in the capital. The flame arrived in Japan on March 20, after it was lit in Greece on March 12.

But the torch relay was canceled just two days before the starting date, as the Summer Games and the Paralympics were delayed to 2021 due to the spread of the new coronavirus.

The number of vehicles accompanying runners in next year’s relay will be scaled back as a precaution against the coronavirus.