Two round halls at Nara temple give up their design secrets 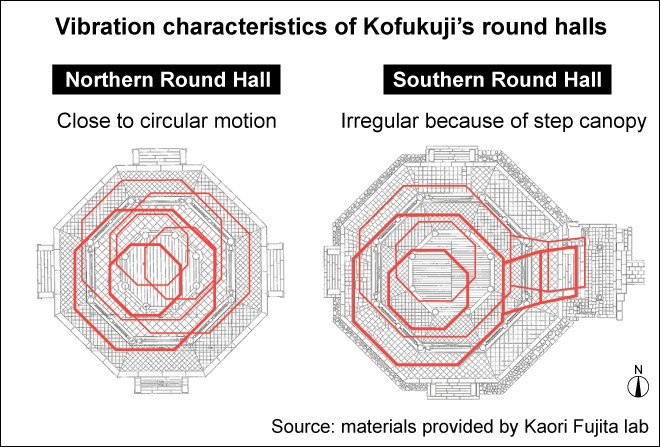 NARA--Medieval carpenters in Japan had a few tricks up their sleeves that astound experts even today.

A pair of octagonal circular halls on the premises of 1,300-year-old Kofukuji temple here, a UNESCO World Heritage site, were built using techniques that make them shake differently in earthquakes.

The differences in the designs of the two wooden structures that produced different vibration characteristics are now understood in a scientific context.

It was the first such study done at the site although similar vibration studies have been carried out at five-storied pagodas and other temple halls.

The findings have important implications for the safety of circular hall buildings that have survived to this day, says the scientist who conducted the study.

Kofukuji officials said the Northern Round Hall was built for the repose of aristocrat Fujiwara no Fuhito (659-720) during the Nara Period (710-784) when Nara was the capital of Japan, only to be destroyed later in a fire and a war. The existing hall, which rises to a height of about 15 meters, was rebuilt in the 13th century during the Kamakura Period (1185-1333).

The Southern Round Hall was the brainchild of aristocrat Fujiwara no Fuyutsugu (775-826) in the early Heian Period (794-1185) but destroyed by fire on multiple occasions. It was rebuilt in the 18th century during the Edo Period (1603-1867).

The Southern Round Hall, which is slightly larger than its northern counterpart, rises to a height of about 22 meters. It is one of the stops on the “33 Temples of Western Japan” pilgrimage route and is noted for its step canopy at the front.

This refers to the portion of the building where a tiled roof with an undulating gable juts out of the circular hall.

The new study was prompted by the northern Osaka Prefecture earthquake of 2018, which registered 4 on the Japanese seismic intensity scale of 7 in Nara.

Kofukuji officials, curious about the difference, requested Kaori Fujita, a professor of architectural engineering with the University of Tokyo graduate school, to investigate.

Fujita conducted microtremor measurements in both halls, spending one day on each in August last year. The survey method is about measuring how buildings vibrate very slightly in response to factors such as a gentle breeze and fine movements of the ground.

The method, which is nondestructive, has been used in the study of five-storied pagodas and other buildings for about a century.

Fujita installed six sensors, each the size of a tea canister, on the ground and on roof beams in each hall to take dozens of measurements of the acceleration of vibrations. Each measurement took roughly between one and five minutes.

The Northern Round Hall vibrated as if it were drawing a circle, just as buildings of symmetrical shapes, including five-storied pagodas, are expected to do.

“Similar studies on wooden five-storied pagodas have been accumulated to some extent across Japan, but until now I was unable to find similar scientific measurements in a traditional wooden octagonal circular hall,” Fujita said. “I believe my study is significant for structural studies of wooden buildings.”

Fujita said it was fortunate that “Kofukuji happens to contain two surviving octagonal circular halls on its premises.”

The Southern Round Hall will be opened Oct. 17 for a once-yearly special treat from 9 a.m. through noon and 2 p.m. through 5 p.m. to allow members of the public to view the hall’s cultural marvels, including a statue of the Fukukensaku Kannon (Amoghapasa) deity, which is designated as a national treasure.

Another special opening is scheduled at the Northern Round Hall from 9 a.m. through 5 p.m. every day from Oct. 24 through Nov. 8. The admission fee will be 300 yen ($2.85) on both occasions.