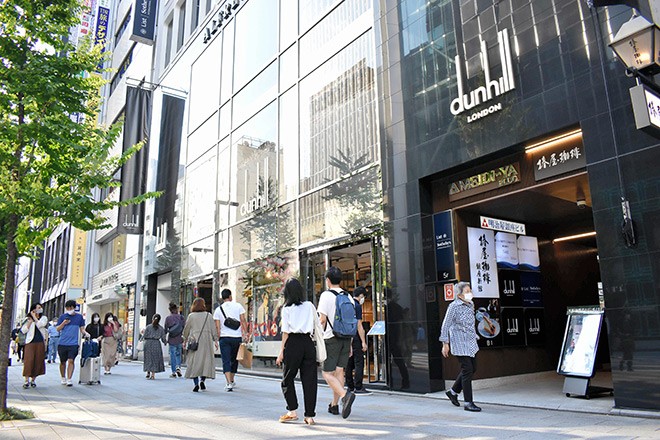 The land price for the Meidi-ya Ginza commercial building in Tokyo’s Ginza district fell for the first time in nine years. (Naoyuki Takahashi)

The average overall price of land in Japan declined for the first time in three years due to economic uncertainties and the absence of foreign tourists caused by the pandemic, government data showed.

The average price for commercial, residential and industrial land slid 0.6 percent this year from last year, according to the land ministry’s report released on Sept. 29.

The ministry’s figures are based on prices as of July 1 and serve as the basis for commercial real estate transactions.

The average price of commercial property fell 0.3 percent year on year in 2020, compared with a 1.7-percent increase last year. It was the first decline in five years and was the key reason for the drop in the overall average price.

For residential properties, the average price dropped 0.7 percent this year, following a decline of 0.1 percent in 2019.

The COVID-19 pandemic has taken a toll on Japan’s economy.

Foreign tourists have been shut out of the country and residents have been asked to stay home to prevent the spread of infections. Many businesses have scaled back or shut down operations on requests from local authorities.

Urban centers had seen land prices surge in recent years due to a construction boom of hotels and commercial complexes that banked on an influx of overseas visitors for the 2020 Tokyo Olympic Games.

Japan’s credit expansion allowed low-interest funds to flow into such projects, creating something similar to an asset bubble.

The sports extravaganza, however, was postponed to next summer over COVID-19 concerns.

Among the surveyed areas that reported drops in prices, 44.6 percent were located in the three metropolitan areas of Tokyo, Osaka and Nagoya. Last year, these urban centers accounted for 19.2 percent of the declines.

Commercial properties, which had driven up land prices, fell 1.1 percent in value in Nagoya this year, the first decline in eight years. Last year, commercial land prices were up 3.8 percent in the Aichi prefectural capital.

In the six-month period through July, commercial land prices actually fell in both Tokyo and Osaka.

The Meidi-ya Ginza commercial building in Tokyo’s Ginza district remained the most valuable real estate in Japan, with a price of 41 million yen ($390,480) per square meter this year.

Other factors were involved in the price declines.
The ministry survey showed steep decreases in land prices in Nagano and Fukushima prefectures, as well as the high-end Denenchofu residential area in Tokyo. These areas were flooded in Typhoon No. 19 in October 2019, and demand for property in those zones has since plunged.

The land ministry said 20 sites in Tokyo and four other prefectures saw year-on-year price declines of at least 4 percentage points due largely to the series of floods that occurred last autumn.

In Nagano Prefecture, the Toyono district of Nagano city where the Hokuriku Shinkansen bullet train yard was submerged after the Chikumgawa river overflowed in Typhoon No. 19 reported the country’s second largest drop of 13.1 percent in residential land prices this year.

The prices were unchanged in 2019 from the previous year.

Koriyama, Fukushima Prefecture, which was also deluged by flooding, registered a decline of 17.1 percent in industrial land prices.

Land prices in the Denenchofu district of Tokyo’s Ota Ward dropped 3.0 percent this year after rising for six straight years. The district was flooded when water breached the banks of the Tamagawa river.

(This article was written by Satoshi Kimura and Naoyuki Takahashi.)