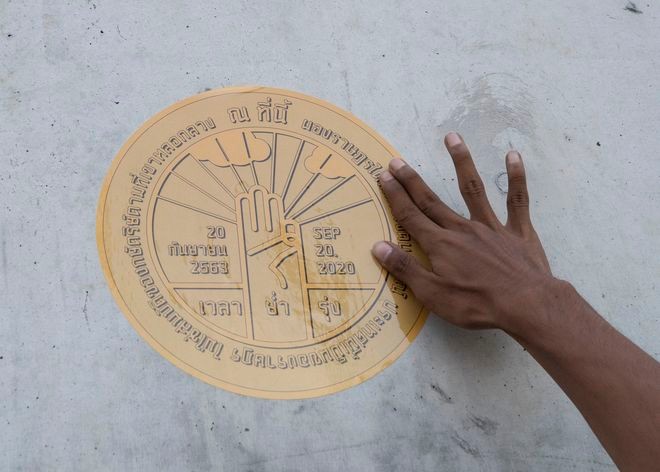 Pro-democracy protester Panupong Jadnok pastes a sticker of a plaque marking Thailand's transition to democracy on the wall of Parliament during a protest in Bangkok on Sept. 24. (AP Photo)

BANGKOK--Authorities removed it swiftly, but a brass plaque proclaiming Thailand belongs to the people and not the king has rapidly become the emblem of a pro-democracy protest movement - appearing everywhere from t-shirts to key rings to tattoos.

The 28-centimeter plaque was removed in darkness less than a day after activists cemented it near Bangkok’s Grand Palace last week, demanding reforms to curb the powerful monarchy of King Maha Vajiralongkorn, until recently a taboo subject.

But reproductions of the plaque, featuring the three-finger salute used by Thai anti-junta activists since a 2014 coup, have since proliferated.

“If you thought you could just make the plaque disappear, you were wrong,” said Anchalee Suebsang-in, 27, an office worker who posted t-shirt designs featuring the plaque on a Facebook page within hours of hearing it had gone. She soon had over 1,000 orders.

“It can still appear anywhere, like on T-shirts, right over our hearts,” Anchalee told Reuters.

The plaque reads “...this country belongs to the people and is not the property of the monarch as they have deceived us.”

It resembles another plaque commemorating the end of absolute monarchy in 1932 that was removed from outside a royal palace in 2017.

The palace did not comment on the plaque and has made no comment on more than two months of anti-government protests.

Some protesters want to reduce the king’s powers and control over palace finances and key army units along with the broader protest movement’s goals of removing former junta leader Prayuth Chan-ocha as prime minister and drawing up a new constitution.

Government spokesman Anucha Burapachaisri declined to comment on the merchandise with plaque designs.

Smaller trinkets like keychains go for 112 baht, referring to Section 112 of the criminal code that prohibits insulting the king and which the protesters want scrapped.

The plaque, placed on the area next to the palace known as Sanam Luang--the Royal Field--was the work of the United Front of Thammasat and Demonstration (UFTD) protest group. They declined to identify a specific artist.

Even before the plaque was removed, they published digital files on the internet so anyone could reproduce it.

“The plaque wasn’t just planted on Sanam Luang, but also in the hearts of the people, so it’s no surprise that it would reappear everywhere,” UFTD leader Parit “Penguin” Chiwarak told Reuters.

Thai activists in Germany placed a replica plaque outside the king’s residence there.

Sellers said they would donate the profits to the protest group, while some would also contribute a separate fund set up to help pay expected legal expenses. Several leaders have already been charged over earlier protests.

The protesters challenge Prayuth’s legitimacy, saying elections last year were engineered to keep him in power. He says they were democratic.

The plaque has not only reappeared in physical form. It is available as Instagram filters that allow users to place it anywhere.

“They tried to censor history and take it away from the people, but they can’t catch up with us,” said game design student Tarathorn Boonngamanong, 22, whose filters have been viewed more than 4 million times.

The proliferation of the plaque reflected the scale of the challenge to the monarchy as taboos were broken by protesters, said James Buchanan, a lecturer at Bangkok’s Mahidol University International College.

“They feel like they’re taking the first steps towards really challenging or limiting the power of the monarchy,” he told Reuters.

For Mai and Berm, two friends who have sold over 2,500 plaque key chains on Facebook, the plaque symbolizes a promise for change.

“We can’t achieve that now, but it shows that we’re determined to get there,” said Mai, 24, declining to give his full name due to fears of reprisal.