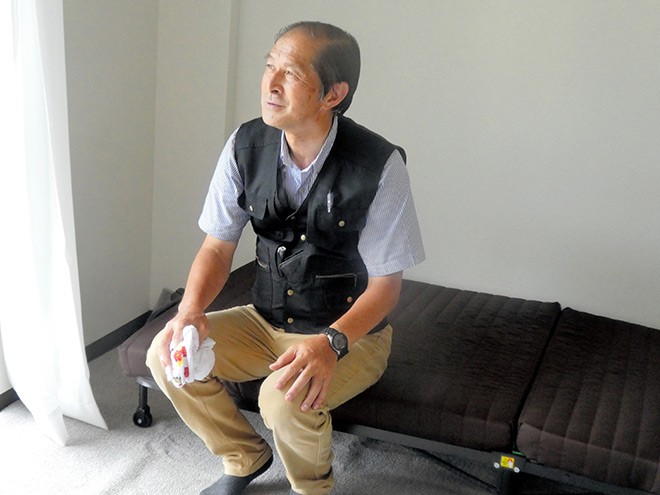 “I’m so happy. This is my own castle,” Tokio Ito said, after moving into a new apartment in Ota, Gunma Prefecture, in August. (Miki Morimoto)

A schizophrenic man who alleges he was unjustly forced to spend almost 40 years in a hospital due to Japan's mental health policies is suing the government for damages.

Tokio Ito, 69, filed a lawsuit on Sept. 30 against the central government at the Tokyo District Court, demanding 30 million yen ($284,300) for his prolonged hospitalization, based on the Law concerning State Liability for Compensation.

The resident of Ota, Gunma Prefecture, said the government failed to put in place a system that enables people with mental illnesses to live in their hometowns and deprived him of his right to live freely.

Ito was first admitted to a hospital at age 16. He ended up being hospitalized for roughly 40 years until he was 61, he said.

The average number of days for a person with mental illness to be hospitalized in Japan was 285 as of 2014, according to health ministry data.

The Japanese government in 2004 drafted a plan to address the lack of a local support system for the mentally ill, which has led to so-called “social hospitalization.”

The plaintiff pointed out that in 1968, an adviser of the World Health Organization (WHO) recommended that the Japanese government improve the situation.

Under the Mental Health Law established in 1950, requisites for consensual hospitalization remain ambiguous, allowing a mentally ill patient to be admitted to a hospital with an agreement from a family member and others, the plaintiff said.

“The government has failed to take viable measures for patients to leave the hospital,” the lawsuit said, citing a lack of funding among other issues.

As a result, Ito was deprived of his freedom of choice of where to live and work and his right to the pursuit of happiness, which are guaranteed by the Constitution, the lawsuit said.

The health ministry has declined to comment on the case.

“Many people think they have no choice but to stay in a hospital due to the lack of information available to help them get discharged,” said Makoto Yokofujita, a constitutional law professor at Hiroshima University who specializes in mental health policy.

“Many also feel nervous about the discriminatory and biased ways other people look at them,” he added. “In that regard, the lawsuit is of great significance.”

“I've spent most of my life in a hospital," said Ito, reflecting on the four decades he spent as a patient. "I missed out on the chance to marry. I have lost free time as well.”

His father took him to a mental hospital in Tokyo after he developed symptoms of paranoia when he was 16 and working at a restaurant in Kanagawa Prefecture.

Later at the age of 23, he was transferred to another hospital in Fukushima Prefecture.

Ito said he “was determined to become a model patient and leave the hospital as soon as possible.” He worked at a chicken farm and other places as part of the hospital activities. His symptoms decreased.

But doctors kept denying his request to leave the hospital.

By the time Ito reached his 40s, he had lost the will to work. His father passed away, leading Ito to become reclusive.

The 2011 Great East Japan Earthquake and tsunami became the turning point for him.

The following year, when Ito was at a hospital in Ibaraki Prefecture where he had been evacuated, a doctor asked him if he wanted to leave the hospital and move into a group home.

“I didn't want to die in a hospital. This is my last chance to have a normal life,” Ito said he thought.

He was 61 years old when he was discharged.

This summer, Ito moved into an apartment.

“I can live where I choose. I’m free to go anywhere. This is like a dream,” Ito said.

He still sees a doctor regularly.

Ito, who was head of an art club when he was in junior high school and dreamed about becoming a painter, spends much time drawing nowadays. The activity has helped him to socialize with others in his community. Two years ago, Ito held a solo drawing exhibition.

“I want to try oil painting next. I’m living my youth right now,” he said.