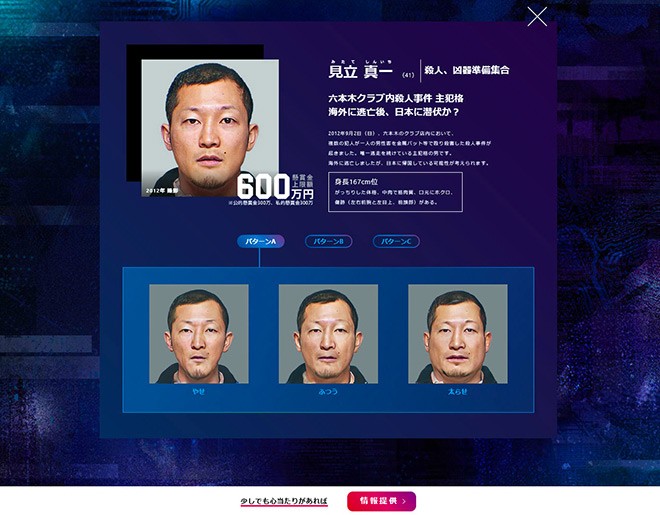 Artificial intelligence programs have created images of the likely current faces of criminal suspects who have long been on the run.

The faces were generated by the private-sector Tehai project team comprising Yahoo Japan Corp., Dentsu Digital Inc. and Party with the assistance of the National Police Agency.

On Sept. 30, the images of five suspects were shown on the Tehai project’s website (https://richad.yahoo.co.jp/tehai). They include Shinichi Mitate, 41, who is wanted in connection with the killing of a man at a nightclub in Tokyo’s Roppongi district in 2012.

The five suspects are all on the NPA’s most wanted list. Police have offered a reward for information leading to their arrest.

Under the project, tens of thousands of facial photos were examined with AI-featured image analysis technology to determine wrinkles and other characteristics that often emerge with age.

The identified age-related elements were reflected on images of the suspects taken in the past, according to the companies.

The suspects’ current appearances were created by three different AI systems, so three varieties were developed for each of them. Thin, standard and fat versions were generated for each variety, meaning that nine kinds of looks are available for each suspect.

According to the NPA, 631 suspects were on the wanted list as of the end of August, and about 30 percent of them have not been seen for at least 10 years.