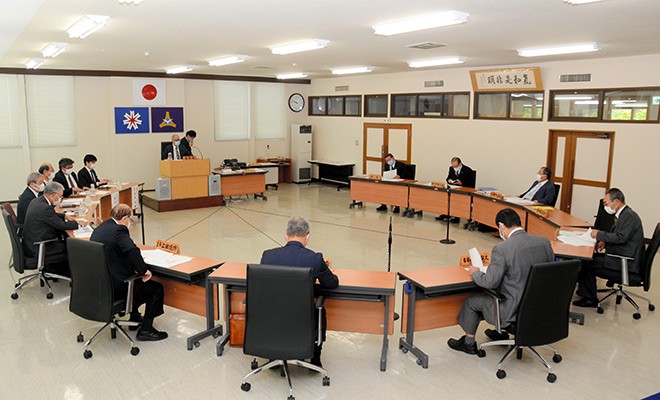 A committee within the Kamoenai village assembly on Oct. 2 approves a measure to apply for consideration as the site for the final nuclear waste storage facility. (Yasuo Sakuma)

Two Hokkaido municipalities with little in the way of industry and bleeding population are moving toward applying to the government for consideration to be the final storage site for highly radioactive nuclear waste.

The village of Kamoenai and the town of Suttsu are expected to formally announce as early as Oct. 8 that they will initiate steps expected to take 20 years before the nuclear waste storage facility actually begins operation.

The major benefit to the municipalities will be grants of up to 2 billion yen ($19 million) for the first stage of the selection process. The money does not have to be refunded if a decision is made later to withdraw from consideration.

The formal applications will be the first since 2017 when the central government released a map of areas that were considered scientifically and geologically appropriate as sites for the final storage of nuclear waste.

The last time an application was made was in 2007 when the mayor of Toyo in Kochi Prefecture on the island of Shikoku expressed interest in applying without first consulting the town assembly. Local opposition was so fierce that a candidate opposed to the idea defeated the incumbent in the next election and the application was withdrawn.

In the first stage of the process that normally takes about two years, past records about natural disasters and geological conditions for the area are examined.

Kamoenai has about 820 villagers and about the only local industry is fishing.

On Sept. 11, it was learned that the Kamoenai chamber of commerce had submitted a request with the village assembly to consider applying for consideration as the final nuclear waste storage site.

Just three weeks later, a committee within the village assembly approved a measure to apply for consideration and the entire assembly is expected to vote on the matter on Oct. 8.

Once approval is given, Masayuki Takahashi, the village mayor, will formally announce that the municipality will apply.

Suttsu was the first to express an interest when Mayor Haruo Kataoka said in mid-August that he was considering applying.

While some citizens have begun a petition drive to hold a referendum on the issue, Kataoka is confident that a majority on the town assembly will give the green light to his proposal.

The Hokkaido assembly passed an ordinance in 2000 that said no nuclear waste should be brought onto the main northern island.

Hokkaido Governor Naomichi Suzuki has gone on record as opposing the plans by local municipalities, but his approval is not required for the local governments to apply for consideration.

After the Oct. 2 assembly committee approval, Takahashi said the explanatory briefing held by central government officials led to an understanding among residents about what was involved.

But one resident referred to grants already received by the village because of its proximity to the Tomari nuclear plant.

“Since we have all received benefits from the nuclear plant, if anyone said they were opposed (to the waste storage facility proposal), they would not be able to live here,” said an 80-year-old resident.

About 15 percent of the village government’s annual budget comes from the grants as a result of being located near a nuclear plant.

(This article was compiled from reports by Kenji Izawa, Toru Saito, Yasuo Sakuma and Tatsuya Harada.)