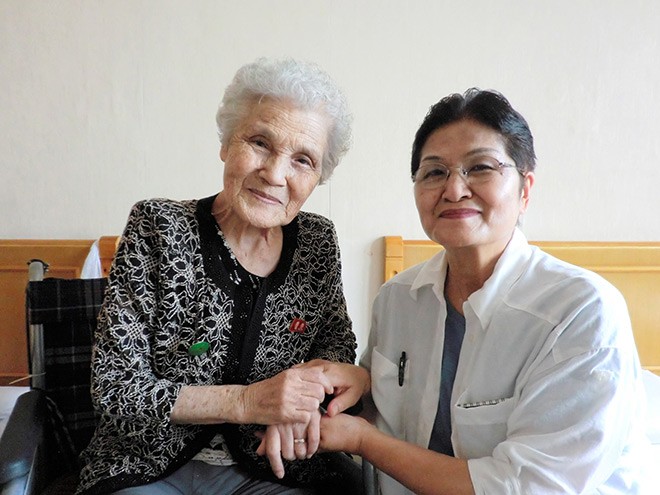 Eighty-nine-year-old Aiko Nakamoto has never returned to Japan after moving with her husband to Hamhung, his hometown in North Korea, in 1960.

Now, her sister, Keiko Hayashi, 69, and Keiko’s second son, Masayoshi, 40, are asking that Aiko be allowed to return to her home country for a temporary visit.

Like Nakamoto, many Japanese women, who married ethnic Koreans and later moved to North Korea with their husbands, have had no opportunity for more than half a century to visit Japan.

Masayoshi visited the Foreign Ministry and the health ministry on Sept. 25 to submit a written request calling for an early resumption of bilateral talks for resolving what he believes is a humanitarian issue.

Keiko and Masayoshi met several Japanese women, who have formed a group called the “Hamhung Rainbow,” in the eastern North Korean city. The women said they wanted to return to Japan temporarily to visit the graves of their parents and for other reasons.

“All the Japanese who are living in Hamhung are advanced in age,” Masayoshi told Foreign Ministry officials and lawmakers. “They are dying one after another. This is a humanitarian issue, and I hope you will arrange for talks to be held soon to realize their wishes.”

Nakamoto, a native of Kumamoto Prefecture, moved to live in Hamhung as part of a repatriation program. The program sent a total of 93,000 or so people, most of them ethnic Korean residents in Japan, to North Korea between 1959 and 1984.

Keiko was 9 when her elder sister left Japan. She remembers how Nakamoto told her that she was going “somewhere colder.” Keiko asked, “Hokkaido?” but her sister equivocated.

Between 1997 and 2000, a total of 43 Japanese spouses of North Koreans made temporary visits to Japan on three occasions.

Nakamoto was scheduled to take part in a fourth session in 2002. However, it was canceled just before it was to take place, partly because the sentiment of the Japanese public worsened over the issue of Japanese nationals abducted by North Korean agents in the 1970s and 1980s.

Research by journalist Takashi Ito, who is well-versed in North Korean affairs, and others brought a new spotlight in 2017 to the presence of Nakamoto and other Japanese wives in North Korea.

Keiko, who lives in Kumamoto Prefecture, visited North Korea for the first time in late June 2018 with Masayoshi.

She was reunited with her sister in Hamhung. The siblings hugged each other, with tears in their eyes, and with words of apology for their long separation.

Keiko again went to North Korea in July 2019 and attended a wedding party for her sister’s grandson.

Pyongyang in 2014 set up a special investigation committee dedicated to Japanese living in North Korea, including abductees and Japanese spouses, in line with the Stockholm Agreement signed with Tokyo.

In 2016, however, Pyongyang declared it was dissolving the special probe panel, offended by how Tokyo tightened sanctions on North Korea in response to the country’s nuclear tests and ballistic missile test launches.

No Japan-North Korea summit has been held since 2004. No talks have made headway, either, over other bilateral issues, such as temporary homecomings for Japanese spouses and visits to the graves of Japanese whose ashes remain in North Korea.