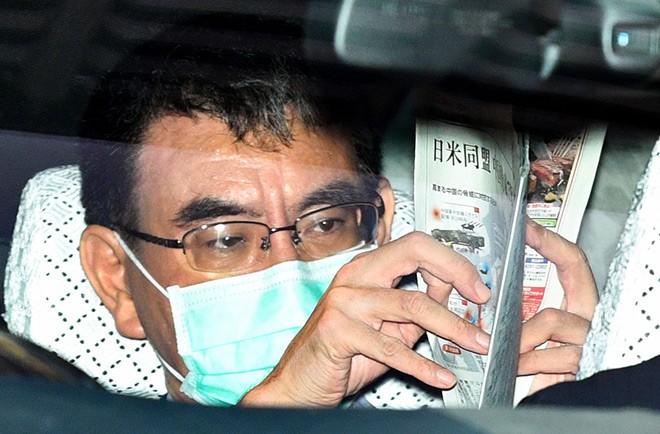 The aborted plan to deploy the Aegis Ashore land-based missile defense systems appears to be another negative legacy left by the Abe administration.

The decision to purchase the costly U.S. weapons systems, made at the initiative of Prime Minister Shinzo Abe, ended up being a debacle.

The Suga administration has taken over the task of coming up with an alternative plan, but the process is showing signs of going astray instead of moving toward a goal.

In its budget request for fiscal 2021, submitted before the Sept. 30 deadline, the Defense Ministry listed the alternative plan as an item without specifying the amount required.

The Abe administration had chosen two locations, one in Akita Prefecture and the other in Yamaguchi Prefecture, as “the only suitable sites” for the Aegis Ashore in eastern and western Japan.

Since the Aegis Ashore deployment at these two locations was abandoned, it is now difficult to propose other sites on the ground.

However, the Suga administration seems to be unwilling to scuttle the plan of building additional missile defense capabilities because it would mean canceling a 178.7 billion-yen ($1.69 billion) contract with the United States.

As a possible solution to the policy quandary, the government is considering deploying radar and other equipment items for the Aegis Ashore on offshore locations.

Last month, the Defense Ministry presented three offshore deployment options: on a commercial vessel; on a destroyer; and on a mobile rig. The ministry is even considering an idea of building a vessel dedicated to missile defense.

But such options raise many questions. Will the conversion of the land-based system to offshore deployment not face technological problems? How will an offshore system deal with attacks from the sky or the sea?

These options will also run counter to the original objective of reducing the burden of the Maritime Self-Defense Force.

It is rumored that the government may have to consider a land-based missile defense system again if offshore alternatives are found unworkable.

It is misguided to try to divert the equipment for a land-based system that the government decided to procure as it is designed.

Government officials say an alternative deployment will allow the government to avoid paying a massive cancellation penalty, but they appear to be motivated by consideration to the United States.

The government should avoid the mistakes of a rash decision to introduce the Aegis Ashore, which led to many twists and turns before it was eventually dropped.

Japan has a two-tier missile defense system of the Aegis-equipped destroyers that can launch interceptor missiles and the Patriot Advanced Capability–3 (PAC-3) surface-to-air interceptor.

If the nation needs to bolster its defense capabilities in response to progress in missile technologies of China and North Korea, the government should consider all possible options from the ground up and scrutinize their cost-effectiveness.

The Defense Ministry’s budget request for fiscal 2021 totaled a record 5,489.8 billion yen, up 3.3 percent from the ministry’s initial budget for the current fiscal year.

An alternative to the Aegis Ashore could further push up defense spending.

The security challenges confronting the nation include new areas, such as space, cyber and electromagnetic warfare.

Efforts to respond to these areas will no doubt compete for funds with other defense expenditures.

The nation’s fiscal woes are becoming worse due to swelling spending to cope with the novel coronavirus pandemic. This requires a vigorous and sweeping reassessment of policy priorities. Defense spending should not be treated as off-limits.

The Defense Ministry’s budget request also includes weapons systems that could be used to strike enemy targets, such as long-range cruise missiles and the conversion of a helicopter carrier into a full-fledged aircraft carrier.

While expenses related to these systems have been budgeted in the past, the government should not simply proceed with these programs now that it has begun considering acquiring capabilities to attack enemy bases on a full-scale basis.

We call for exhaustive debate at the Diet and urge the government to reconsider these programs.