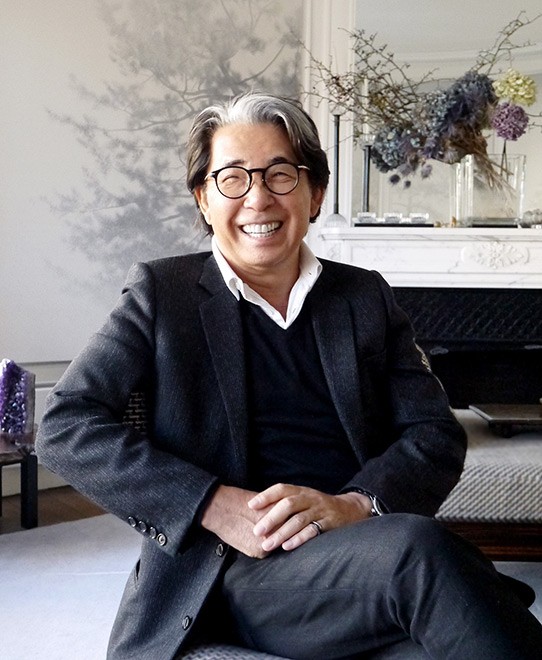 Fashion icon and designer Kenzo Takada, who died from complications from COVID-19 on Oct. 4 at the age 81, was a true pioneer of ready-to-wear clothing.

The founder of the KENZO brand eschewed silk for cotton, and elevated free and natural pret-a-porter apparel over expensive custom clothes.

The down-to-earth designer was known for his pleasant smile and slow-tempo personality, reflected in the unique clothing he created.

“Stay positive and be my regular self” was one of his mottos.

Takada, together with Yves Saint-Laurent, Sonia Rykiel and others, took Paris by storm in the early 1970s.

His goal was to make clothing for women to wear not for special occasions but for when they "use public transportation alone.”

At a time when more and more women were entering the workforce, Takada offered them loose-fitting and dynamic garments that could be bought off the rack, an alternative to luxurious haute couture.

Takada is also known for his “folklore look” collection, a product of his voyage from Japan to Europe.

He left Yokohama on a cargo-passenger ship in 1965. On the way to Europe, the ship called at many ports in Asia, Middle East and Africa, allowing Takada to observe the ways people dressed and their manners, which he later incorporated into the signature style he developed.

“The wide array of colors and scents, and memories of people helped” him to create the collection that incorporated elements of ethnic and tribal garb, said Takada.

He also revolutionized the industry by frequently using cotton, a fabric rarely used in high fashion except for summer items, and by using primitive colors, which was considered a taboo in the industry.

Takada was born in Himeji, Hyogo Prefecture. Because his family ran an entertainment establishment for geisha, he grew up surrounded by women dressed in gorgeous kimono.

The designer said he used to love playing with dress-up dolls.

Takada graduated from Tokyo's Bunka Fashion College with an excellent record. He was one of the first male students at the college that had just opened its doors to men.

He then got a job at an apparel company in the capital and became part of the fashion and culture trend happening at the time in Ginza, known as “miyuki-zoku.”

Later, he went to Paris. There he witnessed first-hand the youth movement of the so-called May 1968 revolution.

Inspired by the city’s dynamism and youth culture, Takada decided to settle in Paris.

Known as “the most famous Japanese fashion designer in the world,” Takada earned long-standing respect in the industry.

But after the mid-1980s, he ceased following the fashion world's ever-changing trends.

“I can’t relate to the ostentatious body-conscious look and the dirty-looking grunge fashion,” he said.

His brand Kenzo was taken over by mega fashion company LVMH Group in 1993. The brand had 400 employees and racked up annual sales of 15 billion yen ($142.01 million) at the time.

Takada then stepped down as the president of Kenzo. He remained as a contract designer for the brand until 1999, when he left the company he created. He was still 60 years old.

“Brand companies started changing around the late 1980s and became more focused on marketing strategies and efficiency," Takada said, explaining the decision. "Fashion lost its excitement factor and became homogenized. I didn’t like that.”

The 1990s were a tough time for Takada, during which both his lover and his mother died, in addition to him selling his company.

After he left the company, Takada had spent much time on oil painting and helping young fashion designers.

He said that because he left Japan when he was young, he wanted to “think about Japan more.”

In the aftermath of the 2011 Great East Japan Earthquake and tsunami, Takada created a series of self-righting dolls called “okiagari koboshi” with help from celebrities in Europe, including actor Alain Delon, to help the reconstruction of the disaster-hit regions.

This year marked the 50th anniversary of Takada’s debut. Since leaving his own Kenzo brand in 1999, Takada took on numerous projects, including making theater costumes and designing clothing for a private brand run by Ito-Yokado Co.

This spring, he launched a home furnishings brand.

“I want to keep challenging myself with new things and chasing my dream,” Takada said.

His sudden death shocked many in the fashion industry, including his friends and comrades.

Junko Shimada, a Japanese fashion designer who lives in Paris, told The Asahi Shimbun that she received a call from Takada last week.

“He said, ‘I’m leaving the hospital,’” she recalled.

“I was eagerly waiting to see him again,” Shimada said through tears. “I couldn’t visit him in the hospital because of the pandemic. I feel pain in my heart, and I have nothing but tears.”

Shimada and Takada have been best friends since they went to Paris for the first time about 50 years ago, she said.

“He was the leader for us, fashion designers in Paris,” she recalled. “He genuinely loved clothes.”

Takada made a dress for her wedding, she said.

“He approached everything with a pure heart. He was such a precious and kind person. So charming and an eternal boy.”

“I think he wanted to live more,” Shimada lamented.

Yuki Torii, another acclaimed Japanese fashion designer who has been based in Paris, also expressed shock.

“We were talking just recently about going to eat together,” Torii said. They have been friends since Torii opened her own boutique in Paris in 1985.

Junko Koshino, who was a cohort of Takada's at Bunka Fashion College, said, “I am in shock and saddened by his untimely death.”

“Everybody loved him as the world’s KENZO,” Koshino said. But to her, Takada was “Ken-chan.”

“He was my beloved, best friend with whom I shared a long time full of memories since we met in college,” she said.