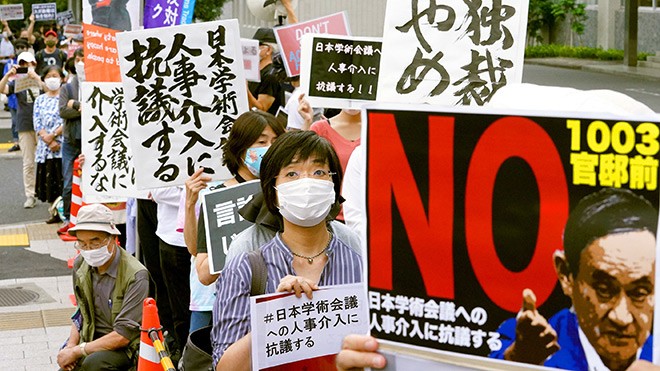 Protesters stage a rally denouncing the government’s refusal to appoint six scholars to the Science Council of Japan near the prime minister’s office building on Oct. 3. (Ryo Kato)

Prime Minister Yoshihide Suga seems to believe he can get away with any policy action as long as he sells it as an attempt to change the administrative tradition of simply following precedent.

While serving as chief Cabinet secretary, Suga often showed an aversion to offering detailed explanations about the government’s policy decisions and actions and simply repeated that the conclusion was justified. Now the prime minister, Suga is showing no signs that he has changed his attitude.

In explaining his decision not to appoint six of the 105 candidates to join the Science Council of Japan, Suga said, “I considered whether I should just follow the precedent in which (the prime minister) appoints all the academics” on the list of candidates compiled by the council.

“I made the decision from the viewpoint of securing comprehensive and bird’s-eye view-based activities” of the council, he added. While he used some important-sounding words such as “comprehensive” and “bird’s-eye view,” he failed to make clear how they have anything to do with his refusal to appoint the six researchers.

The law stipulates that the members of the council shall be appointed by the prime minister according to the council’s recommendations.

When this provision was created, Prime Minister Yasuhiro Nakasone told the Diet that the government’s only role was to “formally appoint” new members. The minister in charge of the matter at that time echoed this view, saying the government would “appoint all the recommended people entirely as members.”

Their remarks represent a weighty promise the government made to the representatives of the people to eliminate the concern that the government’s intervention in the membership appointment process could endanger the council’s independence and neutrality and thereby threaten academic freedom.

The Suga administration has casually broken this promise. Precedents and conventions exist because of the good reasons for which they were created and have been maintained.

If Suga believes he needs to break with such a long-established precedent, he should publicly propose the change for broad debate. That is how he should take the step.

It has also been disclosed that the previous administration of Shinzo Abe, Suga’s predecessor, effectively meddled in the membership appointment process, an act of trampling on the spirit of the law.

The council itself should be questioned for its silence in the face of such government behavior. But the government needs to offer a clear explanation about how this break from the norm has occurred.

When did this deviation from the rule begin and for what reasons? It has been reported that the Cabinet Office produced in 2018 a document saying the prime minister is not legally obliged to appoint all the academics recommended by the council and had it approved by the Cabinet Legislation Bureau.

But why did the Cabinet Office need to take this action? In doing so, how did it consider the implications of past government responses to questions concerning the issue at the Diet?

The government is also responsible for clarifying the reasons for refusing the appointment of the six. If it decided that they were not qualified because of their research records and academic achievements, how did it assess them despite not being an expert? Or did it actually reject them because of their past critical remarks about the government?

Suga has declined to comment on individual personnel decisions. But he should not be allowed to dodge exposure of illegal or embarrassing behavior concerning this issue by brandishing specious claims of secrecy of personnel matters.

It goes without saying that the administration has to produce documents that support its explanations and enable an effective scrutiny of its decision-making process.

The Cabinet Committees of both houses of the Diet are scheduled to hold sessions on Oct. 7 and 8 while the legislature as a whole is in recess.

Suga should attend these sessions to answer questions about this issue, which has vital importance for the relationship between the Diet and the government and for Constitution-guaranteed academic freedom.