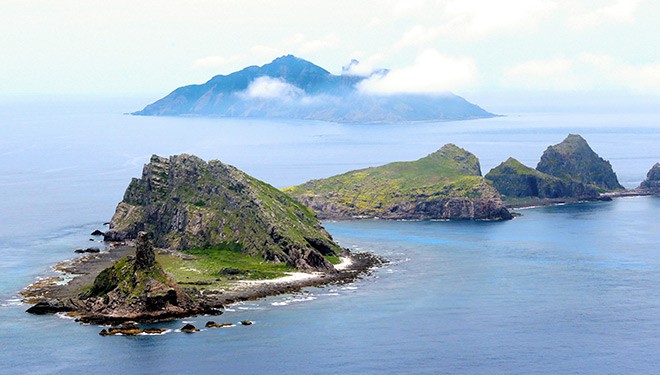 The Senkaku Islands in the East China Sea, which are claimed by Japan and China (Asahi Shimbun file photo)

Japan called on China to take down a government website that reasserts Beijing's claim to a group of small uninhabited islets in the East China Sea whose sovereignty is the source of a long-running dispute between the two countries.

Chief Cabinet Secretary Katsunobu Kato said Oct. 5 that the government had lodged a protest through diplomatic channels with Chinese authorities about the website on the Senkaku Islands.

“China’s argument based on its unique stance is totally unacceptable,” he said at a news conference. “The Chinese side is in no position to set up a website on the Senkaku Islands as they are Japanese territory.”

The islands, which Chinese call the Diaoyu Islands, are under the jurisdiction of Okinawa Prefecture, Japan’s southernmost prefecture.

The website, which is in Chinese, was set up Oct. 3 by the National Marine Data and Information Service, an arm of the Chinese government’s State Oceanic Administration.

China expects to release information in other languages as well, including English and Japanese, to press its case to international audiences, according to the state-run Xinhua News Agency.

The website comes with a virtual 3-D museum featuring archives and maps that China contends is justification for its claim to sovereignty over the islands.

Visitors to the website can view footage of China’s TV news reports on the Japanese government’s decision to purchase some of the islands from private ownership in September 2012.

In the footage, the news described the move as “Japan snatched the Diaoyu Islands.”

(This article was written by Masayuki Takada in Beijing and Ryutaro Abe in Tokyo.)