Suga declines to explain rejection of scholars, but says not political 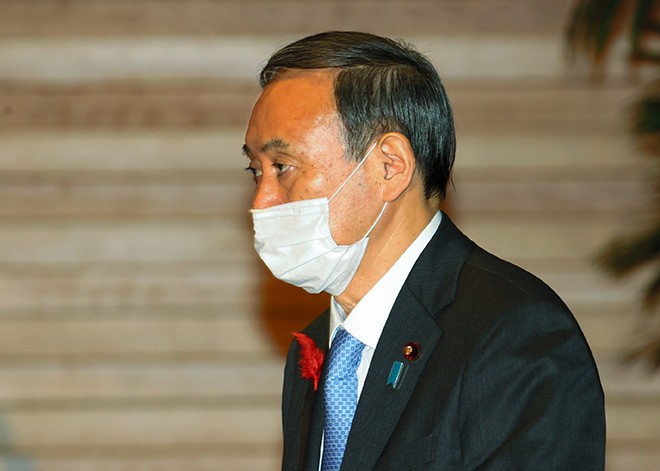 Prime Minister Yoshihide Suga said his desire to break precedent led to the rejection of six scholars from the Science Council of Japan, but he did not explain why those six were singled out.

The six scholars in the humanities and social sciences, who had criticized policies of Suga’s predecessor, are the first council-recommended academics to be denied positions on what has been described as the national assembly of scholars.

“I wondered whether it would be a good idea to simply follow past precedent and appoint all those who were recommended,” Suga said in a controlled group interview with the Cabinet press club held on Oct. 5.

Only reporters from three newspapers were allowed to ask questions, while those of the other media organizations in the press club, including The Asahi Shimbun, could only stand by and listen to the responses.

Suga pointed out that council members were, in a sense, civil servants because the Science Council “is a government organ that uses about 1 billion yen ($9.5 million) in government funds annually for its activities.”

He stressed that the prime minister had the legal authority to appoint new members and said the practice of having the council submit recommendations led to the possibility that current members could nominate their successors.

The six scholars, the only ones rejected from the recommended list of 105 academics, had expressed opposition to measures pushed by Shinzo Abe, such as national security legislation and anti-conspiracy measures. Council members and academics around the nation have said the rejections threatened academic freedom guaranteed under the Constitution.

But he did not explain why those six scholars were denied membership.

The prime minister was also asked about a 1983 Diet session in which a government official said the council’s recommendation list was a formality and that no one on the list would be rejected.

Suga only said, “I made the appointments based on the law.”

The questions were asked by reporters from The Yomiuri Shimbun, Nihon Keizai Shimbun and Hokkaido Shimbun. Interviews of a similar format could be held later as a number of other media organizations, including the Asahi, have submitted requests for an interview with Suga.

Hajime Funada, a lawmaker with the ruling Liberal Democratic Party, wrote in his email magazine distributed on Oct. 5 that he served on the Lower House education committee in 1983, when the change was made to have the prime minister appoint new members of the council instead of having scholars vote on membership.

He criticized the government for failing to explain in the Diet that it has changed its interpretation of how Science Council appointments were made.

“It is regrettable that the result came out like a sneak attack,” Funada wrote.

He pointed out that government officials in 1983 repeatedly said the recommendation system was a formality and that, in essence, anyone recommended would not be refused membership.

He stressed that he was not aware of any recent change to that government interpretation.

In light of the opposition expressed by the six scholars to Abe’s policies, the government is giving the impression that it wants to deter such criticism in the future by refusing appointments to the council, Funada wrote.

(Takahiro Okubo contributed to this article.)