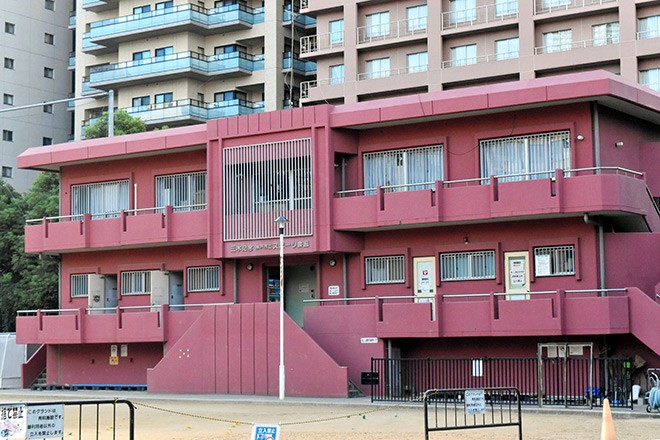 The Hyogo Football Association is housed in this building. (The Asahi Shimbun)

The Hyogo Football Association failed to take rigorous action against discriminatory remarks made by a man who was serving as secretary-general toward an ethnic Korean colleague.

The secretary-general provoked the senior official of the Hyogo Korean football association during a drinking party in Kobe in March by saying things such as, “Come on, you Korean!”

Kenichi Mikitani, head of the prefectural association, released a statement on Sept. 19, the day after The Asahi Shimbun ran a story on the issue, saying the remarks “were made privately during a private meeting” and “were not made in the capacity of a senior official of our association.”

The secretary-general’s behavior over drinks should constitute an act of discrimination if his remarks contained derogatory connotations about somebody’s origins or identity.

That notwithstanding, the prefectural association stopped short of punishing the secretary-general, who quit the association “for personal reasons” in July.

The association had the option of punishing him retroactively, but it did not even hold deliberations on the matter and rather attempted to hush up the hubbub.

I find it so outrageous that Mikitani personally requested the victim of the slur to leave the entire thing a private matter, including the remarks made at the extraordinary general meeting.

Mikitani’s statement should not be the end of the whole story.

It is also baffling that the JFA, which was aware of the development, took a wait-and-see attitude.

“We respected the decision of the Hyogo association, because deliberations should first be made by the prefectural association according to our procedure,” said Kiyotaka Suhara, general secretary and CEO of the JFA.

It is certainly up to a regional football association to decide whether a disciplinary action case that has arisen in that regional branch should be put to deliberations.

That said, the JFA is merely delegating part of its power to its local chapters on the grounds that it is not realistic for the JFA to make decisions on all disciplinary action cases.

The JFA’s disciplinary rules explicitly provide that decisions should be made by the JFA in cases of grave punishments, such as disqualification for six months or more.

A senior official of one regional football association said the JFA gets actively involved in “local cases” only in limited circumstances, such as those involving criminal offenses.

“It is difficult for a regional branch to make a decision on its own on discriminatory remarks made outside a soccer pitch, of which there is no precedent,” said a senior official of another local football association.

The JFA’s compliance code calls for respect for human rights and freedom from discrimination. I doubt the whole development could ever be dismissed as a case of little significance.

By trying to put the lid on an incident that should not have been overlooked, the JFA and its Hyogo prefectural branch are all but giving tacit approval to discrimination.

The Hyogo Korean football association, to which the ethnic Korean official belongs, has taken the entire matter seriously, including the remarks made at the extraordinary general meeting.

The group released an official statement on Oct. 5, which said the development was “deeply regrettable” and called for “reasonable decisions and response measures” to be taken.

The writer covers sports mainly in the Kansai region, including Hyogo Prefecture.