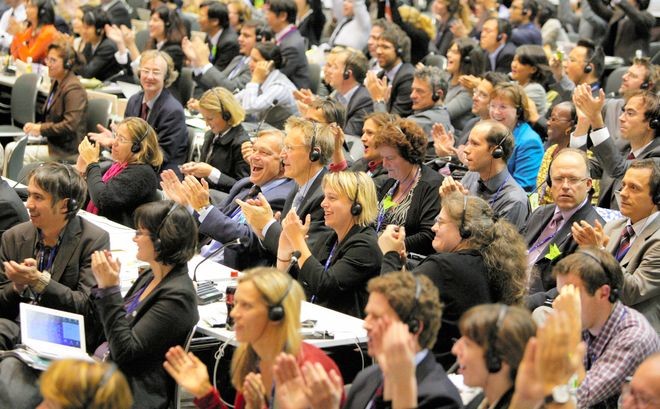 Delegates from across the world applaud after the Nagoya Protocol is adopted at the conference of parties to the Convention on Biological Diversity held in Nagoya in October 2010. (Asahi Shimbun file photo)

The Aichi Biodiversity Targets agreed to by the international community 10 years ago are aimed at protecting wildlife and life-sustaining ecosystems. Over the past decade, however, not a single target has been met fully, according to the United Nations.

The finding amounts to a report card, on which the world received a failing mark for its handling of biodiversity protection. This should alarm all the signatory nations sufficiently to galvanize them into taking concrete actions and setting their next set of targets.

Society is sustained by nature's bounty, as are economic activities. When biodiversity is lost, there are grave consequences. Not only will our daily lives be severely affected by dwindling supplies of farm produce as well as seafood, but the collapse of forest and marine ecosystems also triggers atmospheric and meteorological anomalies that will further endanger the global environment.

To prevent such eventualities, humanity's coexistence with nature must be achieved by the middle of this century. Sharing that awareness, the signatory nations of the Convention on Biological Diversity (CBD) adopted the Aichi targets when they met in Nagoya in 2010.

Twenty targets were set, such as "By 2020, the rate of loss of all natural habitats, including forests, is at least halved" and "By 2020, pollution, including from excess nutrients, has been brought to levels that are not detrimental to ecosystem function and biodiversity."

The report shows the state of progress of the Aichi targets in their final year as analyzed by the Secretariat of the Convention on Biological Diversity (SCBD). Each of the 20 targets was broken into multiple elements to monitor overall progress, but not one target was met fully. Most were only partially met, and only six were considered attainable.

The report notes that wild animal populations have fallen by more than two-thirds since 1970, and that one-third of marine fish stocks are overfished. Such statements make us wonder if nature can really recover.

The signatories to the CBD are to decide the next set of targets at the 2021 conference, and the report calls for the establishment of clear, quantitative goals.

It is extremely difficult to come up with numerical targets when the interests of participants are in conflict. But it is also a fact that unless goals are presented in tangible forms, there will be no forward momentum. The international community needs to reflect on what went wrong during the past decade and strive anew to forge a consensus.

The report also points out the inadequacy of "national targets" which each signatory nation determines on the basis of overall targets. Advanced nations such as Japan, the United States and those in Europe must lead the rest of the world by setting ambitious targets.

Sustaining biodiversity is closely connected to controlling global warming, stopping plastic waste from polluting the oceans and fighting various environmental problems that confront us today. And it is important for the public and private sectors to join forces rather than work separately.

It is the responsibility of the present generation to leave Earth in a decent shape to the next generation.