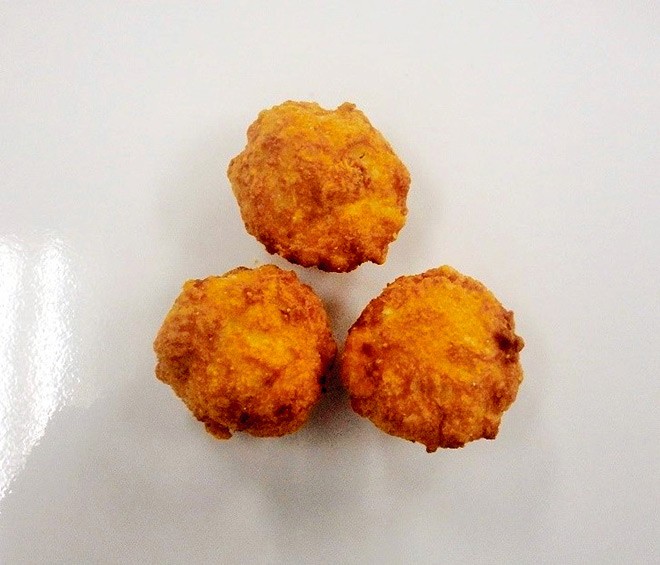 Space Karaagekun fried chicken nuggets are half the size of reguar Karaagekun on sale to the public. (Provided by Lawson Inc.)

Japanese astronaut Soichi Noguchi will be carrying a special delivery on his trip to the International Space Station (ISS) when he departs Earth aboard the manned spacecraft Crew Dragon operated by private U.S. company SpaceX Corp.

He'll be loaded down with fried chicken nuggets.

Leading convenience store chain Lawson Inc. has provided special packets of its popular fried chicken nugget snack Karaagekun for the mission that requires Noguchi to stay at the ISS for a prolonged period.

The freeze-dried nuggets branded Space Karaagekun will be heading into space as early as the end of October for those aboard the ISS to snack on.

The chicken nuggets will be going boldly where none have gone before. It will be the first time for an original product from a Japanese convenience store to soar into space, according to Lawson.

Lawson has no plans to sell the nuggets to the public.

The space food is based on the regular flavor of Karaagekun, has a crispy texture and is half the size of the regular version.

In zero-gravity conditions, tiny bits of powder could cause problems with the equipment on board, so Lawson made the chicken nuggets to be eaten in a single bite.

Space Karaagekun was certified in June by the Japan Aerospace Exploration Agency (JAXA) as a Japanese food suitable for eating in space as the product can be stored for long periods.

As of the middle of September, 45 items had been certified for use as Japanese space food, including Space Karaagekun and Kewpie Corp.’s mayonnaise, according to JAXA.