Internet sperm donations increase, along with the dangers 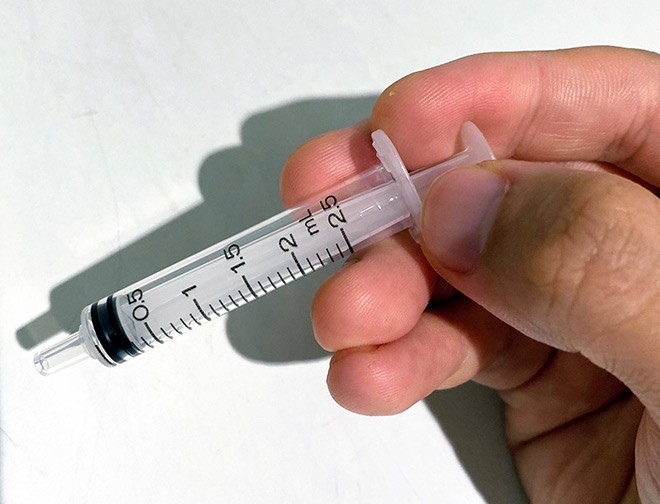 A syringe used for sperm donations (Provided by male donor)

A decrease in certified services for sperm donations has pushed aspiring parents to the internet, where a lack of legal restrictions on donors can lead to pitfalls with lifelong consequences.

More men are offering their sperm through social media. However, the recipients must largely take the donors’ word on who they are and the types of genes they may pass down.

One woman in her 30s searched Twitter accounts and came across a sperm donor claiming to be a graduate of the prestigious Kyoto University.

The woman decided to use the man’s sperm because he had the same blood type as her husband, who had also graduated from a national university, located in Tokyo.

After meeting the man and obtaining his sperm, she became pregnant in summer 2019. But through her continued contact with the donor, the pregnant woman learned that he never graduated from Kyoto University.

In fact, he was a former student from China who attended a national university in a rural region of Japan.

The woman at that time was already five months pregnant, making an abortion difficult.

She gave birth in February.

“I would never have accepted his sperm if he was honest about his background,” she said. “I believe there is a need for a law to regulate dishonest donors.”

Asahi reporters met with the donor, who was in his 20s and working for a major company.

“I never intended to deceive her, but I did not want to reveal my personal information because it would have been problematic if the child in the future said, ‘I want to know who my father is,’” the man said.

A quick search of Twitter for sperm donations led to several dozen accounts. There was also a website offering to match donors with prospective parents.

The Twitter accounts highlighted the physical features of the donor as well as his educational background.

Most offered their sperm at no cost, although the delivery method varied, including intercourse when the woman was ovulating.

One sperm donor in his 30s who graduated from Keio University in Tokyo agreed to be interviewed over the internet.

He said he first donated sperm three years ago to a lesbian friend. After seeing how happy she became after giving birth, he began donating his sperm for free.

He said he is now the biological father of many other children.

According to the man and several other donors, many requests for sperm come from couples facing fertility problems, sexual minorities or single women who want to raise children on their own.

Yoko Wakamatsu, a lawyer who has handled cases of establishing parent-child relationships based on artificial insemination, pointed out the dangers of sperm transactions between private individuals.

“There is always the risk of latent evil intent, such as whether the man can certify that the sperm is actually his,” Wakamatsu said. “But with the diversification in types of families, the use of social media to gain children will spread if there are no clear legal regulations on sperm donations using such media.”

Mamoru Tanaka, a professor of obstetrics at Keio University Hospital who in the past conducted artificial insemination by donors (AID), said sperm donations over the internet have always carried the risk of infectious disease and hereditary problems.

DECLINE IN AID AT MEDICAL INSTITUTIONS

Despite those risks, the use of the internet to find sperm donations has increased with the decline in the number of medical institutions that conduct AID.

According to the Japan Society of Obstetrics and Gynecology, 3,790 cases of AID were handled in 2017, leading to the birth of 115 babies.

But when Asahi reporters contacted the 12 medical institutions registered to perform AID, only seven said they continued to do so.

Keio University Hospital is one of two institutions that no longer accept new patients for AID.

In 2017, the hospital added wording in the consent form signed by sperm donors that noted the possibility that courts might order the disclosure of sperm donors’ names in lawsuits filed by children seeking the identity of their biological father.

That led to a sharp decrease in new donors because of concerns they could end up being held financially responsible for children produced through their sperm donations.

Moreover, AID in Japan can only be used by couples whose husband has been diagnosed as sterile, meaning sexual minorities and single woman cannot apply.

The lack of sperm banks in Japan has also led some people to go abroad to obtain a sperm donation, such as Rui Kakyoin, 35, a manga artist who does not identify as either a man or woman and holds no sexual urges for either gender.

Kakyoin considered adoption at one time but decided to use a sperm bank in the United States four years ago that led to the birth of a child.

The artist is now using a sperm bank in Europe in hopes of giving birth to a second child.

“In order to protect the human rights of children, Japan should immediately establish an environment that would allow for the provision of sperm from a safe donor,” Kakyoin said.

(This article was written by Taichi Kobayashi, Nami Sugiura and Daisuke Hatano.)