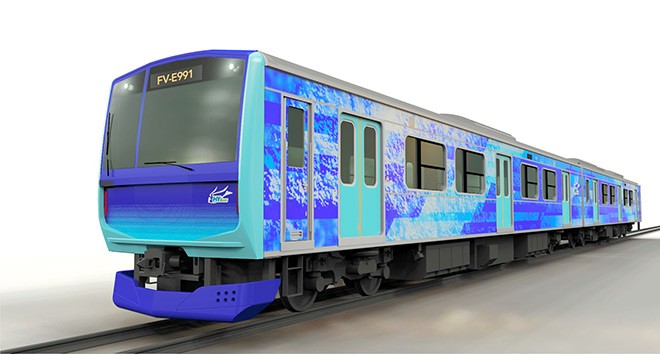 East Japan Railway Co. said it is partnering with Toyota Motor Corp. and Hitachi Ltd. to develop a test train powered by hydrogen fuel-cell technology and a storage battery.

In announcing the partnership Oct. 6, the railway operator said it plans to begin testing in March 2022 and aims to eventually put the train into practical use, as part of its long-term goal of slamming the brakes on carbon dioxide (CO2) emissions.

It would be the first train in Japan to run on hydrogen power without emitting CO2.

The train is expected to reach speeds of up to 140 kph using high-pressure hydrogen, officials said.

Testing will begin on the JR Tsurumi and Nanbu lines in Kanagawa Prefecture outside Tokyo.

JR East said it will invest about 4 billion yen ($37.8 million) in the project. The cost includes development and testing.

It aims to achieve zero CO2 emissions in fiscal 2050.