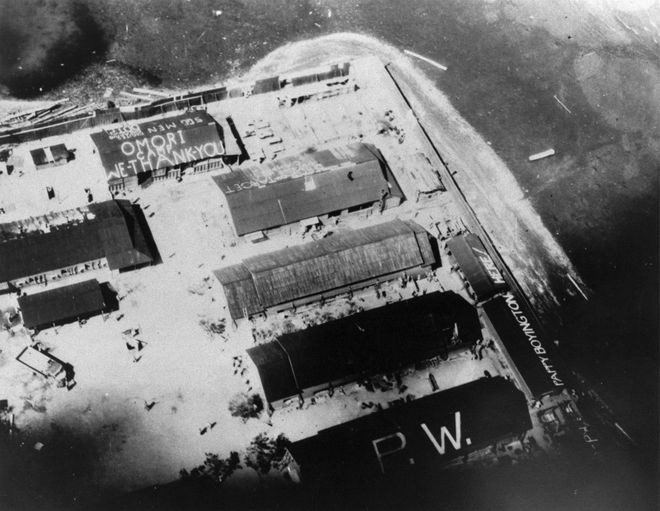 The words “P.W.,” “Omori Camp” and “We Thank You” can be seen on the roofs of apparent POW buildings in Tokyo. (Photo taken by the U.S. military)

Despite limited resources and a dwindling number of witnesses, a citizens group has continued efforts to determine conditions in POW camps in Japan where 10 percent of the captured combatants died in World War II.

More than 35,000 prisoners of war were detained at 130 internment camps across Japan during the war, a fact not widely known in the country.

The citizens group, called the POW Research Network Japan, plans to publish the results of its long study next year.

The organization has been surveying the former POW camps since 2002. Its members have visited the National Diet Library for documents from the General Headquarters of the Allied Powers (GHQ).

Toru Fukubayashi, the group’s late representative, for example, had found a list of dead POWs from among the GHQ documents.

Members have also collected memorandums by former detainees, traveled abroad for research and interviewed those connected to the wartime camps.

According to the results of their research, 140,000 officers and soldiers were taken prisoner in the Asia-Pacific region by the imperial Japanese military during the Pacific War. The POWs came from Britain, the United States, the Netherlands, Australia, Canada, New Zealand, India and various other nations.

Much has been written about internment facilities set up in Japanese overseas territories, where the POWs often endured brutal conditions and were forced to build railways, roads and airfields for use by the imperial military.

More than 35,000 prisoners were sent to Japan to alleviate labor shortages in shipbuilding yards, factories and mines. An estimated 3,500 of the servicemen died of illness, hunger, violence and other reasons.

After the end of World War II, former guards and officials of the detention camps in Japan were convicted as Class B and C war criminals.

In 2004, the POW Research Network Japan released the names of POWs by location on its website. It reportedly received more than 100 emails of inquiry from outside the country.

The group has since provided information to former POWs and their families, even guiding them around sites in Japan where internment facilities used to stand.

The group is currently examining internment camps for POWs and around 20 detention facilities for private citizens from Britain, the United States and other countries.

The investigation is intended to show how the camps were opened and closed, the types of detainee sent to each facility, what they ate and how they lived and worked, as well as how officials of those facilities were treated in war crimes trials.

The findings from the survey will be included in an encyclopedia, tentatively named “Horyoshuyojo Yokuryujo Jiten” (POW camp encyclopedia), to be authored by around 20 members, including a former teacher, a graduate student, an individual who once worked at a bank, and a retired newspaper reporter.

Former broadcast writer Taeko Sasamoto, 72, a co-representative of the group, said she became interested in the POW issue after she visited a cemetery for the British war dead near her home in Yokohama’s Hodogaya Ward.

The Yokohama War Cemetery contains the remains of more than 1,800 British servicemen who were captured and died in Japan.

“I initially knew nothing about why the British soldiers came all the way to a foreign nation,” Sasamoto said. “I was ashamed of my ignorance about the problem while learning wartime history and decided to examine what occurred to each of those resting in the cemetery.”

Sasamoto worked with Yoshiko Tamura, another group member, to release a report titled “Horyotachi no Koenaki Koe ni Mimi o Katamukete” (Listening to the voiceless voices of the POWs).

The report is distributed at the annual memorial service organized by residents at the cemetery in August. The backgrounds of three of the buried POWs are presented each year.

Sasamoto mentioned the name of William Henry Brodie, an engineer from New Zealand who was detained at a POW camp in Kamaishi, Iwate Prefecture, and died of burns suffered on Aug. 9, 1945, in an Allied naval bombardment that resulted in a huge death toll.

“Not enough light has been cast on the issue of POWs, such as the life of Brodie lost to history, even 75 years following the end of warfare,” Sasamoto said. “I expect the publication of our encyclopedia to promote readers’ understanding of the issue.”

In the planned book’s general remarks, Aiko Utsumi, 78, a professor emeritus of sociology at Keisen University, who founded the POW Research Network Japan with Sasamoto and others, will detail the causes and responsibilities of POW mistreatment.

A postwar trial detailed how camp officials who were convicted as Class B and C war criminals abused the prisoners.

However, Utsumi, who wrote “Nihongun no Horyo Seisaku” (The Japanese army’s POW policies), argued that those who gave the orders have not been held responsible, and the structural problems in the military that led to the abuse cases have not been revealed.

“We need to further look into the government and military by examining trial records, documents and testimonies and identify who planned and organized the forced labor program,” Utsumi said.

She and other editors are currently holding meetings with publishing firm Suirensha and plan to put the 800-plus page encyclopedia on sale next year.

Few official records remain in Japan about the POW camps, so the overall treatment of the prisoners remains largely shrouded in mystery.

But a survey by Sasamoto did uncover the circumstances of an internment camp in Kamaishi.

The facility was installed as the No. 3 branch of the Hakodate POW camp in November 1943. Immediately after that, 201 Dutch POWs arrived there from Java. At the time of Japan’s defeat in the war, the facility held 168 Dutch prisoners, 86 Britons, 78 Americans, 13 Australians, five New Zealanders and one Canadian.

At least 50 POWs died in custody there. While 32 were killed in two naval bombardments, the others died apparently of pneumonia or malaria.

The POWs were forced to work at the Kamaishi works of Nippon Steel Corp. They were initially hired by a subcontractor to build tunnels and strengthen shore protection, and then were ordered to load and cart materials, ore and coal, and to fix machinery at the site.

The food they received was better than the meals given at other facilities. Although relatively fewer grains were offered, vegetables were served frequently and fish several times a week at the Kamaishi camp.

Flour was distributed on the biweekly holiday, allowing POWs to bake bread, according to a book by a former detainee.

In the postwar trial, four officials, including the director and interpreters, were found guilty as Class B and C war criminals.

The camp director was indicted on 14 charges but was found guilty on only eight, including beating a prisoner and permitting a subordinate to resort to violence.
He was found not guilty of forcing a sick POW to work.