‘After I killed my grandpa, I played pachinko 10 hours straight’ 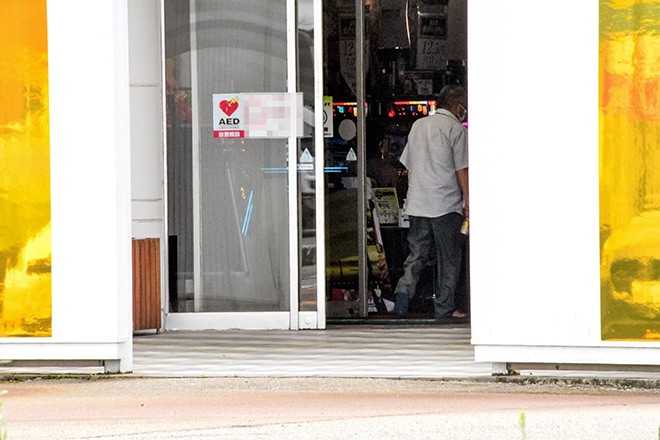 A pachinko parlor Shota Kitajima said he frequented in Kanazawa. Kitajima was diagnosed with severe compulsive gambling disorder after he was arrested and charged with murdering his grandfather. (Rina Horikoshi)

But Kitajima was sitting in a Kanazawa Prison meeting room in the capital of Ishikawa Prefecture as he made the comment.

From behind an acrylic sheet, Kitajima, dressed green workwear and wearing a face mask, began pouring out the details of how he became addicted to pachinko (Japanese pinball) gambling and ended up behind bars for murdering his grandfather.

Though numerous forms of gambling are illegal in Japan, pachinko falls into a curious loophole. It is a form of gambling, which means monetary payments are illegal, but they are carried out off-premises. Pachinko parlors are ubiquitous nationwide.

Kitajima got his first taste of pachinko after graduating from high school while working as a plumber.

During one lunch break, he stopped by a pachinko parlor and won between 10,000 yen and 20,000 yen playing a slot machine called “pachisuro.”

He said he thought, “I can make money like this? How easy!”

It was enough for the young man to get hooked.

He said he did not have a particular hobby before then. But with pachisuro, he had a desire to master the game. He spent hours watching explanatory videos and reading books about winning strategies.

“The whole production was fun for me. Figuring out the way each slot machine was designed was really interesting,” he said. “And I wanted to make money. That’s the biggest thing.”

Thereafter, Kitajima’s new daily routine went like this: He downed breakfast at a beef bowl restaurant near a pachinko parlor. He then stood in a line for 90 minutes or so before the parlor opened to pick up a numbered ticket that allowed him to enter at 10 a.m. sharp and sit in front of his favorite machine.

He spent the entire day playing the pachisuro machine, consuming nothing but cigarettes and drinks.

Sometimes he lost track of time and did not realize the parlor was closing in 15 minutes until a staff member came over to tell him to leave shortly.

Soon he began spending tens of thousands of yen on each session.

But the awareness threw him even deeper into addiction.

“Let me make more money to make up for the (loss). That’s what I thought back then.”

Eventually, he lost all the money he had.

At around the age of 20, Kitajima for the first time took out consumer loans totaling 500,000 yen. Armed with the money, which was supposed to make up the losses he had incurred from gambling, Kitajima went straight back to pachisuro machines.

“Sometimes I won, and sometimes I lost,” he said.

He got deeper and deeper in debt. Within six months or so, Kitajima owed about one million yen.

In the beginning, he paid back several tens of thousands of yen every month. But soon, he stopped bothering about the notices he received for overdue payments.

This wasn't due to any increase in his amount of nerve, Kitajima said. Rather, he convinced himself, “Once I win, I can pay it all back, I’m sure.”

To make quick cash, he stole a television and other items from his 71-year-old grandfather's home, where he was living.

His grandfather then kicked him out, saying, “I won’t let you come home until you get a job.”

With no money and nowhere else to go, Kitajima took refuge in a barn that his grandfather owned nearby.

It was far from glamorous, lacking even electricity.

On Nov. 7 of that year, Kitajima came up with a plan to steal another television from his grandfather’s home. But since he couldn't stand being scolded by his grandfather, he decided to kill him.

On the morning of Nov. 8, Kitajima pushed the buzzer of the entry intercom outside his grandfather's house. His grandfather came out and said, “You took your young bother’s TV, didn’t you?”

Kitajima then strangled the old man from behind with a belt.

Afterward, he sold the TV and other items he had stolen at a recycling shop in exchange for 55,000 yen.

He then made a beeline for a pachinko parlor, arriving at 10 a.m. sharp as usual, where he engrossed himself in playing pachisuro for about 10 hours until police caught up with him.

“Oh, I had fun, as always,” he said, recalling his last time playing the game.

Police opted to make an emergency arrest without a warrant on the charge of murder. Kitajima was charged with committing a robbery-homicide and later diagnosed with severe compulsive gambling disorder.

One of the major arguments presented during Kitajima's lay judge trial that began at the Kanazawa District Court in fall 2019, was over whether he was mentally competent and could be held responsible for the crime.

Defense lawyers argued that gambling addiction had a profound effect on Kitajima. They said Kitajima showed his I.D. when he sold the TV that he looted from his grandfather’s home, an indication that he was not afraid of getting found out.

The court sided with prosecutors, sentencing Kitajima to life imprisonment. The ruling was later upheld at the Nagoya High Court’s Kanazawa Branch.

The World Health Organization (WHO) has designated gambling addiction as a mental disorder.

About 3.2 million people in Japan suffered from gambling disorder in 2017, the Japan Agency for Medical Research and Development said in an estimate it released.

Pachinko addiction and other types of gambling problems were responsible for 976 of the approximately 280,000 criminal cases that police handled in 2019, according to the National Police Agency.

Non-burglary offenses such as a shoplifting accounted for the most, totaling 498 cases, followed by burglary with 309 cases. Another was a robbery-murder case, similar to Kitajima’s offense.

The risk of getting addicted to gambling becomes higher when a person “has a developmental disability and other disorders, is highly impulsive and has a difficulty of fitting in with society,” said Sachio Matsushita, deputy director of the National Hospital Organization Kurihama Medical and Addiction Center, who was involved in a national survey on the issue.

In Kitajima’s case, an expert medical witness said the defendant had a mild disorder and he could not properly express what he wanted to. The witness also said Kitajima was unable to grasp what others were trying to tell him by way of advice.

Defense lawyers said Kitajima lost his mother at the age of 21, the only person he could open himself to and consult with.

He also visited a job-placement office with Kitajima. But Kitajima could not get it through his head that his grandfather cared about him, the defense team said.

“People around him did not understand addiction problems and communication disorders,” one of the defense lawyers said during the trial. “They did not provide him with proper treatment and other types of help, and that partially pushed him to the edge.”

Kitajima has appealed the court's ruling and is currently awaiting the Supreme Court’s decision on his conviction.

“If there was a treatment and I could stop gambling, I would have wanted to get counseling,” he said quietly while sitting in prison.

‘IMPRISONMENT NOT THE ANSWER’

Most Japanese remain in the dark over the existence of addiction recovery programs and treatment methods that are currently available, experts said.

At the Kurihama Medical and Addiction Center in Yokosuka, Kanagawa Prefecture, patients work with psychotherapists and learn to realize that they have been an addict in group sessions.

Noriko Tanaka, who heads a group called the Society Concerned about the Gambling Addiction, points out that the effects of imprisonment on people with addiction problems only makes the condition worse.

The well-regulated life in prison leads inmates become tempted to try to fix their problem through their own self-control and lowers their motivation to get treatment. That ups their risk of committing another offense, Tanaka said.

“Imprisonment is not the answer. It does not solve the underlying problem,” she said.