U.S. expresses concern over China link to Cambodian base 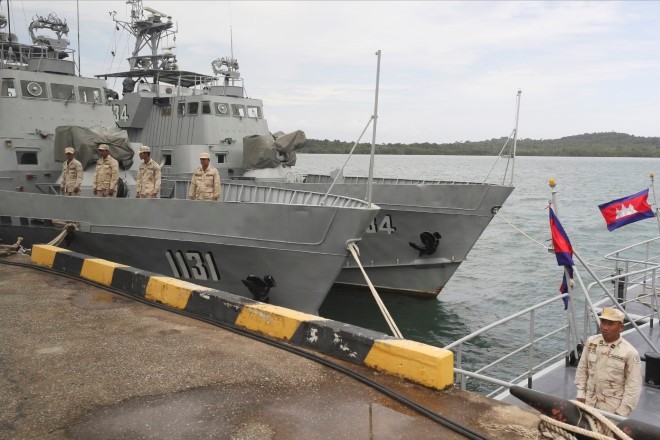 Cambodian navy troop members stand on a navy boat at Ream Naval Base in Sihanoukville, southwestern of Phnom Penh on July 26, 2019. (AP Photo)

PHNOM PENH--The United States expressed disappointment Wednesday that Cambodia is tearing down a U.S.-funded building used for a maritime security program, and voiced concern that the action may be linked to the possible use of a Cambodian naval base by China’s military.

“Such a military presence would negatively impact the U.S.-Cambodia bilateral relationship and be disruptive and destabilizing to the Indo-Pacific region,” the U.S. State Department said in a statement distributed Wednesday by the U.S. Embassy in Phnom Penh.

Controversy over the Ream Naval Base on the Gulf of Thailand erupted more than a year ago, when The Wall Street Journal reported that an early draft of a reputed agreement seen by U.S. officials would allow China 30-year use of the base, where it would be able to post military personnel, store weapons and berth warships.

The State Department said the U.S. hopes Cambodian Prime Minister Hun Sen will accept Washington’s offer of a dialogue to discuss how the United States “can support infrastructure at Ream that would benefit an independent Cambodia and all nations supportive of a free and open Indo-Pacific.”

Washington and Beijing are contending for influence in Southeast Asia. China is Cambodia’s closest political ally and main source of economic support, through aid and investment. Relations between Cambodia and the United States are rocky because of Washington’s criticisms of Hun Sen’s government for being undemocratic.

Concerns about China’s intentions for the area were heightened by a deal that gave a Chinese company control over a large part of the coastline, and construction of an airport on its land that appeared to be designed to accommodate military as well as civilian aircraft.

Hun Sen in June last year responded that China has not been given exclusive rights to use the base, while also saying that warships from all nations, including the United States, are welcome to dock there. He pointed out that Cambodia’s Constitution does not allow foreign military bases to be established on its soil.

However, the issue was resurrected last week with new reports in Western media about satellite photos showing the demolished facility.

Cambodia on Tuesday issued a statement saying that the demolition of the 7-year-old Tactical Command Headquarters at the Ream base and its relocation in a new building elsewhere was a planned upgrade because the existing facility was too small and lacked docking facilities, with limited capacity for training and other activities, It said the new facility would involve no change in function or relationships with foreign partners.

Hun Sen on Wednesday addressed the controversy again. Speaking at a ceremony opening an amusement park, he denied that Cambodia was allowing China to establish a base on its territory. He said that to clarify the issue, he has ordered the state television to rebroadcast, with English subtitles, his speech last year denying that China was being allowed to set up a base.

He also said he had ordered the Foreign Ministry to send an official diplomatic note to all foreign embassies in Cambodia to let them know his government’s position.