Elderly driver in fatal accident in Ikebukuro pleads not guilty 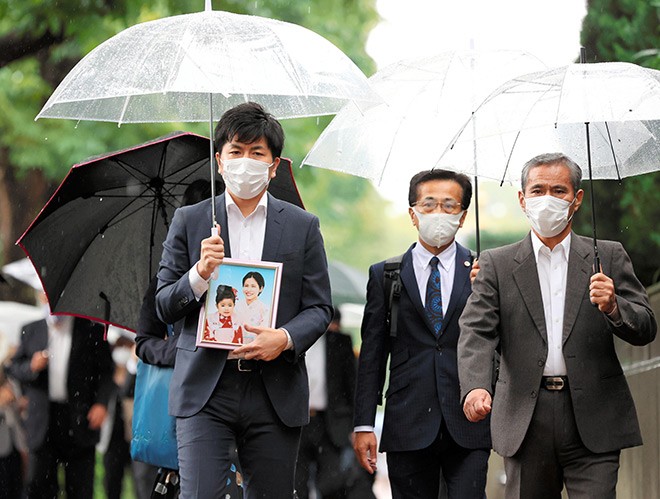 Takuya Matsunaga, who lost his wife and daughter in a car accident in Tokyo’s Ikebukuro district last year, arrives at the Tokyo District Court on Oct. 8. (Toshiyuki Hayashi)

An octogenarian driver accused of running a red light and killing a mother and her young daughter in Tokyo's Ikebukuro district in 2019 pleaded not guilty at Tokyo District Court on Oct. 8.

“I have no memory of continuing to press the accelerator,” said Kozo Iizuka, 89, a former senior bureaucrat at the industry ministry.

Mana Matsunaga, 31, and her daughter, Riko, 3, who were on a bicycle going through a pedestrian crossing, were run over and killed. Nine other people were injured.

Iizuka apologized to Matsunaga's bereaved family but denied the charges of negligent driving resulting in injury and death.

“There was some sort of abnormality in his car’s control system,” Iizuka's lawyers said. Therefore, the charges do not apply to Iizuka, they said, claiming his innocence.

According to the indictment, Iizuka was driving a car on April 19, 2019. At around 12:25 p.m., the vehicle ran a red light and sped through two intersections in the Ikebukuro district of Toshima Ward in the capital.

Iizuka kept pressing the gas pedal instead of the brake pedal.

Prosecutors said Iizuka mistakenly pressed the accelerator when he was changing lanes. The car reached speeds up to 84 kph when it entered the first crossing and about 96 kph when hitting the two.

“An analysis of the car’s electric system did not show a record of any abnormality,” prosecutors said.

After the accident, the Metropolitan Police Department questioned Iizuka, who suffered broken bones to the chest in the accident and was hospitalized, on a voluntary basis.

Police sent the case to the prosecutors office in November the same year. Iizuka was indicted without arrest in February this year.

Iizuka told police during voluntary questioning, “I may have mistaken the accelerator for the brake.” He also told investigators that “the brakes did not work,” according to police.

At the first hearing on Oct. 8, Iizuka told Matsunaga's family, “I can't think of what to say when I think about their sadness of losing their loved ones. I apologize.”

Matsunaga’s husband, Takuya, 34, along with other family members, sat in the courtroom and stared at Iizuka.

(This article was written by Shunsuke Abe and Yuko Kawasaki.)