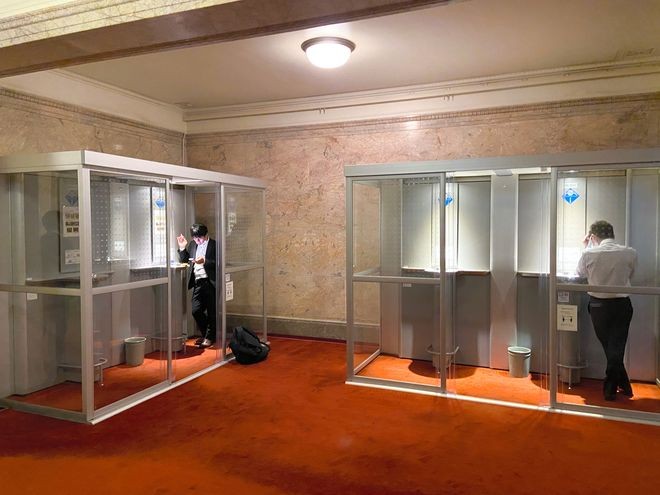 A smoking zone within the Diet building in Tokyo’s Chiyoda Ward is shown on Sept. 30. (Sokichi Kuroda)

Lawmakers are a law unto themselves when it comes to disregarding the law on smoking in their offices.

“I sometimes find it too much of a bother to go all the way to the smoking room because so many people visit my office each day,” explained a ruling party Diet member.

Pressed on the issue, the Diet member admitted to having “just recently learned that smoking is prohibited at my office” within the Diet members' office building.

A nationwide ban on indoor smoking was enforced as part of efforts to protect people from passive smoking ahead of the now-postponed 2020 Tokyo Olympic and Paralympic Games.

The revised health promotion law that took full effect in April bans smoking in principle in the Diet building and three adjacent lawmakers’ office buildings, which are regarded as an extension of the Diet. Smoking is only allowed in dedicated smoking rooms.

Smoking is totally banned in schools, hospitals and government offices. Smoking is allowed only in smoking zones set up outside buildings.

Anti-smoking restrictions are more lax at the Diet building and lawmakers’ office buildings than ministry and agency buildings, where smoking rooms cannot be installed, but even the loose rules are not observed by many of the lawmakers.

“Lawmakers should serve as role models in efforts to stop passive smoking,” complained Hiroshi Yamato, a professor of health issues at the University of Occupational and Environmental Health, Japan, citing the anti-smoking law.

Dedicated smoking rooms set up on each floor of lawmakers’ office buildings that sit adjacent to the Diet building in central Tokyo are normally packed with lawmakers and their secretaries, as a weekday early afternoon in late September attests.

The regulations are as tolerant as those for private office buildings.

Prior to April, lawmakers were free to smoke inside their offices if they chose. But now, smoking outside the dedicated rooms carries a fine of up to 300,000 yen ($2,825).

Eighty-three smoking rooms and booths have been introduced in the Diet building, on the floors of its members’ office buildings and elsewhere, according to publicity representatives of the Lower and Upper houses.

Despite the proliferation of smoking areas, many lawmakers continue to indulge in the habit in their offices, one of whom is Yukio Edano, head of the main opposition Constitutional Democratic Party of Japan.

At a late August news conference, Edano was asked whether he had smoked at his office following the introduction of the amended law. He admitted that he “did not take it seriously.”

“There still are many lawmakers (who sneak a smoke inside their offices), and it can no doubt be said that the restrictions are not being abided by,” he said.

According to insiders, many Diet members also vape rather than smoke.

The general disregard for the law means that lawmakers’ aides who usually stay in Diet members’ office buildings as well as officials from ministries and agencies and lobbyists who frequently visit them could be exposed to second-hand smoke.

A woman in her 30s who works as secretary to a smoker lawmaker expressed her disappointment at the situation.

“I thought the lawmaker would stop smoking after the enforcement of the revised law,” she lamented.

With that in mind, the government moved to introduce anti-smoking measures and impose penalties after Japan was selected as the host of the Tokyo Olympics and Paralympics.

The initiative, partly promoted by overseas Olympic organizers pressing Tokyo to host a "clean" Olympics, was met at the outset by entrenched resistance from lawmakers who represent the tobacco industry.

A pro-tobacco group of lawmakers from the LDP, along with other Diet members who remain cautious about smoking regulations, put up so much opposition that the amendment to the health promotion law was watered down to allow, for example, patrons of small restaurants that meet certain conditions to smoke.

Released by the health ministry in March 2017, the initial draft revision slotted the Diet into the same category as ministries, agencies, prefectural government offices and other administrative organizations where indoor smoking rooms cannot be introduced.

The Diet and local assembly buildings, however, were later removed from the list in the amendment, allowing politicians and others to smoke at isolated areas in those buildings, whereas smoking is totally prohibited within administrative facilities.

Upper House member Shigefumi Matsuzawa, who serves as secretary-general of a suprapartisan group of lawmakers working to take countermeasures against passive smoking, described it “unacceptable that Diet members who create laws go against legislation.”

The group on Sept. 9 demanded the speakers of the Upper and Lower houses to look into the issue and eliminate all smoking-permitted zones from the Diet and elsewhere.

Yamato said a survey he carried out found that only Tokyo and 23 prefectures had completely ban smoking inside their assembly buildings as of March 2020. He explained the risk behind installing smoking zones, saying, “Smoke leaks from smoking rooms, so it is impossible to fully prevent passive smoking.”