After 20 years, aquarium finds out its rays are a new species

The newly discovered ray species had been kept at the Kagoshima City Aquarium for some 20 years before its unique characteristics were noticed. (Video by Atsushi Misawa) 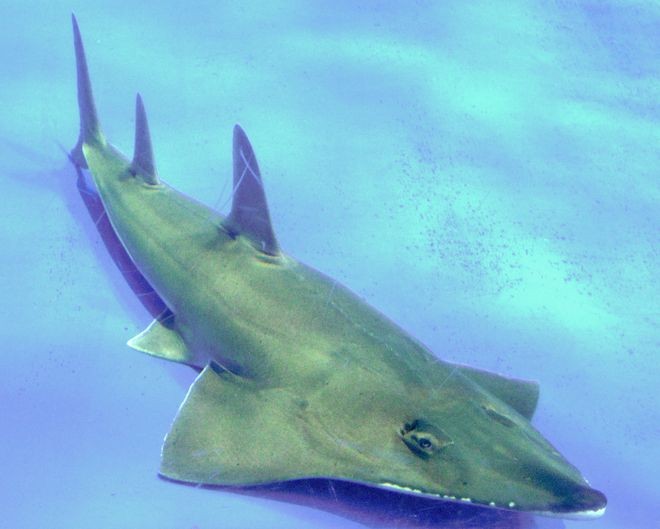 A newly discovered ray species named Rhynchobatus mononoke, which often stays at the bottom of the Kuroshio Great Water Tank, is shown at the Kagoshima City Aquarium in Kagoshima on Sept. 24. (Atsushi Misawa)

KAGOSHIMA--It was right under their noses.

For more than 20 years, no one was able to discern that two rays kept at a local aquarium since it first opened were actually from a previously undiscovered species.

The rays on exhibit at the Kagoshima City Aquarium in the Honko-Shinmachi district had, until recently, been billed as a type of ray called a giant guitarfish.

They had been part of a popular section called the Kuroshio Great Water Tank since the aquarium started operating in 1997.

But staff said they didn’t attract much attention from visitors because the rays didn’t move around much, lingering at the bottom of the tank.

Then, a few years ago, a researcher from the Kuroshio Biological Research Institute in Otsuki, Kochi Prefecture, examined the two rays and noticed the shape of their heads subtly differ from that of the giant guitarfish.

The newly discovered creature is now known as a Rhynchobatus mononoke, because its triangular head resembles a “mononoke” ghost wearing a hood when seen from behind.

The head of the new species is not as sharp as the giant guitarfish, and the ends of its two dorsal fins are rounder--subtle differences.

The giant guitarfish can grow to a maximum of 2.5 meters long. Its body looks just like a shark, but it also has some physical features that are similar to rays.

The Kagoshima City Aquarium jointly researched the two rays, along with the Kuroshio Biological Research Institute and the Kagoshima University Museum, before concluding that these rays come from a previously undiscovered species.

Their findings were published in the Ichthyological Society of Japan’s international academic journal in September.

According to the Kuroshio Biological Research Institute, it is the first time in a decade or so that a new ray species has been discovered from the seas around Japan.