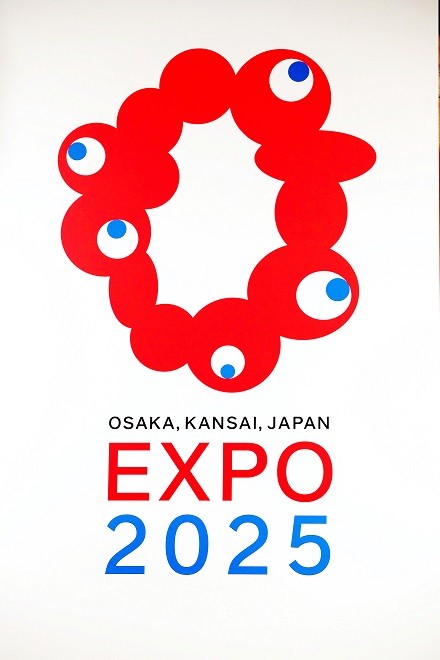 Although drawing a mixed reaction from the public, the 2025 Osaka Kansai Expo logo, which looks like bad balloon art, has lifted the profile of the event at a difficult time.

The Japan Association for the 2025 World Exposition is now struggling with its invitations and other activities amid the global novel coronavirus pandemic.

However, the official logo has attracted much interest on the internet as posts call the design either "weird" or "cute," which has helped raise awareness of the Osaka expo.

Kiyoshi Mori, vice secretary-general of the association, which is organizing the world's fair, is grateful for the buzz the expo's logo has created since its release on Aug. 25.

“Many people have become increasingly aware of the expo thanks to the power of the design,” he said. “Going with the flow, we will start the full-scale process to hold the fair.”

The logo's grotesque appearance may look disturbing to viewers, but that is why it was chosen.

Comprised of a circle of red round objects representing cells that differ in shape, the logo embodies the event’s main theme of the “brilliance of life.”

When the logo was unveiled by the association on Aug. 25, critical messages poured in online, describing it as “the worst (among the five final candidate designs).”

Another critic stated the design is “bizarre and similar to frog eggs,” while a comment panned it by saying, “The logo appears a new kind of monster, and the googly-eyed part looks creepy.”

Other online users, however, looked favorably on the design, and noted it conjures up thoughts of Mukku, a famous character from the children's TV program “Hirake! Ponkikki” (Open! Ponkikki), or the package illustration of Tohato Inc.’s snack food Caramel Corn.

“We appreciate that because we have received many positive comments from, for example, people who felt like eating Caramel Corn after a long time,” said a Tohato representative in reference to the online buzz.

Many individuals who love the peculiar design, “which makes people more attached to it after repeatedly seeing it,” later started posting images of bread and a key ring they created in the image of the logo on social media.

INSPIRED BY 'TOWER OF THE SUN'

The expo logo was developed by the graphic designers’ group Team Inari, based in Osaka.

According to Tamotsu Shimada, 55, head of Team Inari, the red circles and ovals reproduce cells and the eye-like section depicts the cell nucleus. The two different designs were combined to portray the brilliance of life.

The creators, Shimada said, paid careful attention to finishing the design in line with the event’s main theme “Designing Future Society for Our Lives.”

Shimada, who was born and raised in Osaka, was deeply moved by the "Tower of the Sun" artwork building designed by the late artist Taro Okamoto, when he visited the 1970 Osaka Expo as a child.

“I tried to recreate the essence of the unique and impressive 'Tower of the Sun' in our design,” said Shimada.

The production by Team Inari was among 5,894 submissions sent to the Japan Association for the 2025 World Exposition, and eventually selected from the five final candidates by the screening committee.

It won eight votes out of a total of 11 in the committee, and was praised by the panel chairman, architect Tadao Ando, as “expressing a sense of pleasure typical of Osaka” and “being weird, which is part of its attraction.”

“The logo may not appear lovely when I wear it and there may be people opposing the expo, but I would like citizens to love it (the design),” Matsui said at a news conference.

The Japan Association for the 2025 World Exposition is applying to the Japan Patent Office to register and trademark the logo, and is looking to sell items using the logo.