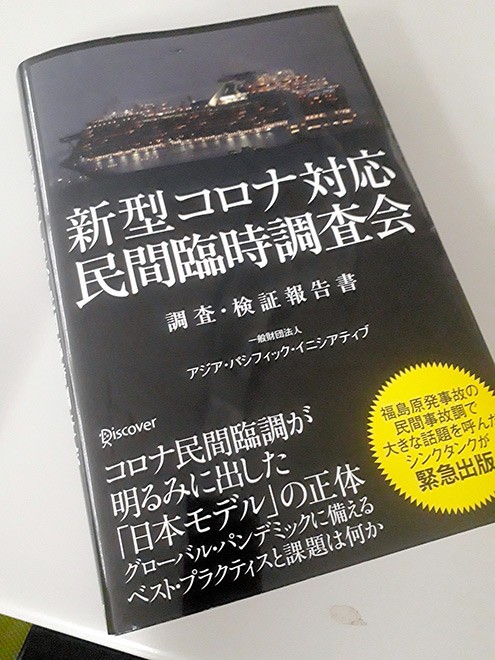 Fears of spreading panic among the public or sparking criticism against the government dictated the timing of key measures to slow the spread of the novel coronavirus in Japan. But despite the often haphazard approach taken by the government, Japan somehow managed to have one of the lowest fatality rates for COVID-19 among advanced nations.

That was one of the conclusions reached by a private-sector committee looking into the novel coronavirus situation in Japan.

The committee, headed by Yoshimitsu Kobayashi, chairman of Mitsubishi Chemical Holdings Corp., was established by the Asia Pacific Initiative, a Tokyo-based think tank headed by Yoichi Funabashi, a former editor in chief of The Asahi Shimbun.

The four-member committee interviewed 83 government officials, including former Prime Minister Shinzo Abe and then Chief Cabinet Secretary Yoshihide Suga, as well as bureaucrats in the Cabinet Secretariat and the health ministry.

They were asked what happened during the six-month period from about mid-January, when Japan confirmed its first novel coronavirus infection.

According to the committee’s report released on Oct. 8, one example of the haphazard approaches taken by the government was Abe’s sudden decision to close all schools to prevent the spread of the virus. He informed a Feb. 27 meeting of the government task force dealing with the pandemic of his decision.

But not everyone in the government was on board.

The report described an exchange between Abe and Koichi Hagiuda, the education minister, before the task force meeting.

Hagiuda opposed the across-the-board closure of schools and pressed Abe on how serious he was.

“All measures will be implemented based on the responsibility of the government,” Abe told Hagiuda. “I believe we should go ahead with” the closures.

Abe’s public request later on Feb. 27 for the closures led to confusion among schools around Japan, which had little time to make arrangements and adjustments with the start of the academic year just around the corner.

“It was a difficult decision. We wanted to prevent panic from breaking out in schools,” Abe told the committee about his announcement. “Another reason was the risk of students becoming infected and passing the virus on to their grandparents.”

But one source with the government panel of experts told the committee that the decision to close schools “was close to meaningless in terms of epidemiology.”

The committee’s report pointed out that the negative fallout from Abe’s decision led to hesitancy among government officials about further restricting entry into the country to prevent the virus from spreading.

Many European nations imposed strict entry restrictions from early March. But Japan did not follow suit until about late March.

The report stated, “If such (entry) measures were implemented sooner, there is the possibility that the spread of infections in Japan from April could have been suppressed to a certain degree.”

One source in the prime minister’s office interviewed by the committee said, “Prime Minister Abe was taken aback by the backlash and criticism over his call to close all schools, and it was not possible to propose further closures because of fears of even further criticism.”

The source said not being able to propose such measures “was the biggest regret” about what should have been done.

Government officials and the experts’ panel also bickered over when to lift the state of emergency, according to the report.

But government officials wanted to lift the state of emergency sooner because of concerns about the effects on the economy.

In the end, an agreement was reached on an indicator for new cases: The state of emergency would be lifted if the number over the most recent week was under 0.5 cases for every 100,000 people.

And even if that figure was not met, the state of emergency could still be lifted by taking into account the ratio of new cases in which infection routes were untraceable.

Asked by the committee about the lifting of the state of emergency, Abe said: “I thought it went rather well. The experts were not thinking about the economy so politicians had to take responsibility for making the decision.”

He also said that issuing the state of emergency on April 7 was the most difficult decision he had to make.

The report also pointed out Abe’s issuing of the state of emergency was delayed because Tokyo Governor Yuriko Koike had used the term “lockdown” in her news conference about two weeks earlier.

The report said the governor’s comment caused confusion among the public, leading to panic-buying of food and other supplies and the spreading of unfounded rumors.

Officials in the prime minister’s office felt that declaring a state of emergency amid such an environment would exacerbate concerns that residents would be unable to leave their homes like people in Western nations that had declared lockdowns.

Yasutoshi Nishimura, the state minister in charge of economic revitalization who was the government point man in dealing with the pandemic, said Koike’s comment “was a turning point and led to a delay in issuing the state of emergency.”

The committee was unable to interview Koike because of scheduling conflicts.

(This article was compiled from reports by Naoyuki Himeno, Hiroshi Ishizuka and Rihito Karube.)