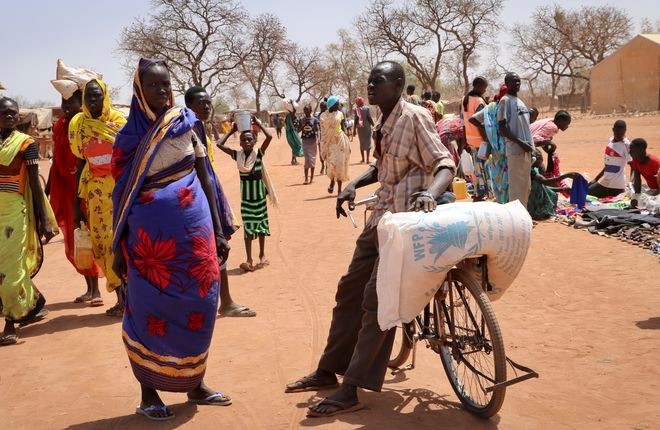 With the double scourges of armed conflict and infectious disease sweeping the world, international cooperation has never been more crucial to human survival.

An international organization working on the front line of efforts to bring food to people facing starvation has been chosen as a symbol of the importance of global collaboration to tackle humanitarian challenges.

The World Food Program is the recipient of this year's Nobel Peace Prize. The U.N. agency is involved in activities to secure food supplies for areas ravaged by war, natural disasters and other life-threatening situations, mainly in developing countries.

After decades of steadily decline, the number of people facing starvation started rising again five years ago. The crisis shows no signs of improving. Two main factors behind this alarming trend are the spread of armed conflict and more severe natural disasters due to climate change.

This year, the challenge of dealing with acute food shortages in many parts of the world has been further compounded by the new coronavirus pandemic. The spread of COVID-19 has led to restrictions in the flows of people and goods, threatening to worsen the food security situation in poor nations in Africa, the Middle East and Latin America.

An estimated 690 million people around the world are suffering from chronic malnutrition, according to the United Nations. The number of people facing acute food shortages, or those who are hard-pressed to consume the minimal amount of food needed for survival, could increase from the estimated 150 million pre-COVID-19 level to 270 million, the world body warns.

Starvation often leads to new armed conflict in the battle for food.

“Until the day we have a medical vaccine, food is the best vaccine against chaos,” the Nobel committee said in its citation, quoting the WFP’s own words.

Reducing the number of people who don’t know where their next meal is coming from lays a foundation for world peace. This is the message of the Nobel awarded to the WFP and we need to take it seriously.

The WFP is the world’s largest humanitarian aid organization operating 5,600 trucks, 30 vessels and nearly 100 aircraft. It brings 15 billion meals to starving people every year in missions often fraught with danger.

While lauding the WFP’s efforts, the Nobel committee also stressed that many U.N. agencies, including humanitarian aid organizations involved in helping children and refugees, are facing a financial crisis.

The principal factor behind their financial woes is the spread of the “my country first” policy. In particular, the Trump administration has cut U.S. contributions to the United Nations as it has turned its back on international cooperation.

The Nobel committee, which argued the main lesson of the COVID-19 pandemic is the importance of “multilateralism,” seems to have chosen the winner of the peace prize to reaffirm the important role of the United Nations, which is marking its 75th anniversary, and warn leading powers against failing to support multilateral cooperation.

Now that all countries, including developed nations, are facing human security and health challenges, this should serve as an opportunity to remember the original spirit of global cooperation upheld by the United Nations.

The U.N. Sustainable Development Goals, shared by all member countries, call for eradicating poverty and hunger from the world by 2030.

As a self-appointed and committed champion of the SDG’s, Japan should further expand international aid from both its public and private sectors and widen the scope of activities to tackle urgent challenges.

The pandemic is an unfailing reminder of the fact that both starving countries and rich nations with plentiful food are in the same boat floating in choppy and stormy waters.