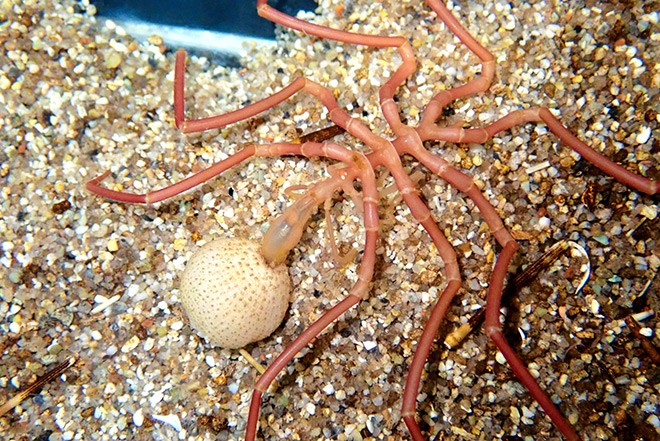 But it wasn’t the spectacle that startled Moritaki, 50, who is in charge of invertebrates at the aquarium.

It’s that little is known about what the sea spiders, “yamato tokkuri umigumo” (Ascorhynchus japonicus) to be exact, eat, let alone how long they live.

Few researchers specialize in this particular species. Some overseas research papers said it ate marine sponges and sea slugs, but no records have been found to say that it ate sea anemones.

Around 8 a.m. on July 30, Moritaki watched as the sea spider, which measured about 15 centimeters in diameter with its legs outstretched, extended its mouth to chomp into the sea anemone in the same tank.

He hastily grabbed his camera to capture the rare moment, which lasted about 10 minutes.

Moritaki got lucky again only about two months later on Sept. 30 when he saw the sea spider sticking its head into another sea anemone at almost the same time as the last sighting.

He thought he could hear the chomping sound as it bit into its prey with its triangle-shaped mouth lined with numerous small teeth.

It is believed that there are about 1,300 sea spider species around the world. In Japan, they live in deep waters across the Pacific side of the archipelago, but their lives are shrouded in mystery.

For example, fishermen hate the “kaiyadori umigumo” (Nymphonella tapetis) so much that they call it the “marine vampire” because it feeds on the body fluids of clams and other creatures.

In May 2014, Moritaki first saw a yamato tokkuri umigumo eating a sea anemone. That particular sea spider has since died, but he was given the rare chance not only once but twice by another specimen six years later.

“I had always thought it would prefer to eat something soft, but I never imagined it would eat this much,” Moritaki said.

Generally, yamato tokkuri umigumo kept by aquariums die within one year. But the sea spider at Toba Aquarium has been alive for nearly two years.

“This individual may be in really good condition,” Moritaki said.