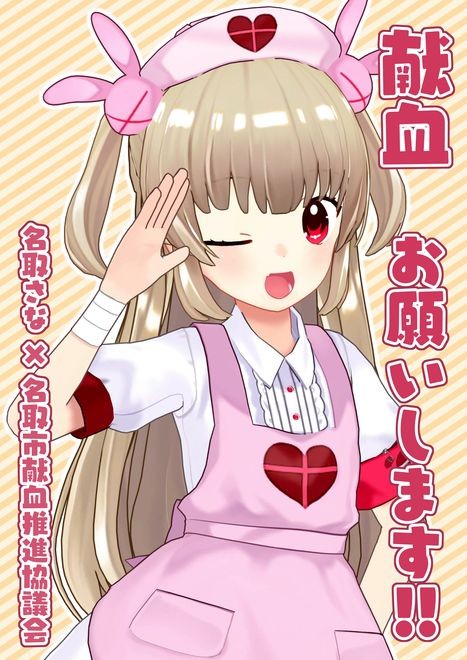 NATORI, Miyagi Prefecture--Young people are pouring in from across the country to roll up their sleeves and donate at a local fall blood drive.

But the sudden influx of youth eager to donate is not related to a special connection they have to the city, nor is it due to a desperate appeal from local health officials.

The main attraction is the new nurse.

Sana Natori, a popular animated YouTube personality dressed as a rookie nurse, is the new face of the blood drive, and her image is drawing zealous fans--and their blood--from all around Japan.

Her fans have taken to Twitter to profess their adoration for the cute virtual personality who is helping to bolster the city’s blood supply. One fan showered praise on city officials for making the fictional character the official mascot.

"Drain all my blood and use it," another hardcore fan tweeted.

Donning a pink uniform and nurse cap adorned with a red heart, Sana Natori made her YouTube debut two years ago. Her YouTube channel has about 218,000 subscribers and she has more than 200,000 Twitter followers.

The city's public health center chose the popular character as its promotional mascot after struggling to attract young people to give blood.

Desperately searching the internet for a solution, one local official stumbled across the popular icon whose surname, Natori, is spelled the same as the city.

The health center said it proposed a collaboration and Sana Natori, who had no previous relationship with the city, was enthused about the idea.

Officials set up standing banners featuring Sana Natori at blood donation venues at shopping malls and other locations across the city.

Donors are given a poster featuring the character to take home.

When Sana Natori announced her role as the blood drive’s poster child on Twitter, the tweet attracted 190,000 likes and quickly went viral.

At the first session on Aug. 30 featuring the new mascot, the number of donors more than doubled from the previous day to 93. Young fans rushed to the venue from Miyagi and other prefectures in the Tohoku region, with some devoted fans even coming from as far as Shimane and Aichi prefectures.

The health center had to move to a reservation system and limit the number of posters given out at the venues to prevent crowds from forming. When the second session took place on Sept. 26, once again, some fans showed up from faraway places, such as Fukui and Hyogo prefectures.