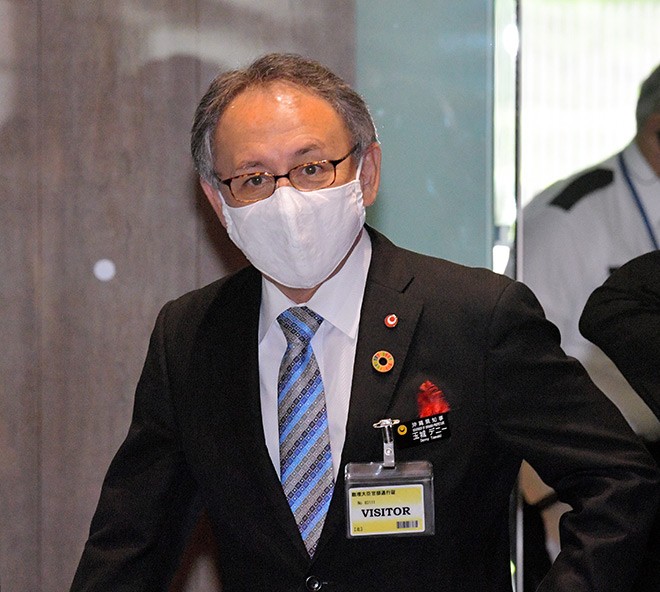 Okinawa Governor Denny Tamaki called on Prime Minister Yoshihide Suga, when the two met on Oct. 7, to work to remove the danger posed by U.S. Marine Corps Air Station Futenma to residents of the southern prefecture.

During their first meeting to be held since Suga took office, Tamaki said he wants Tokyo to take action on alleviating the danger, which was the starting point of all talks. This is apart from the highly contentious plan for relocating the air station in Ginowan to the Henoko district of Nago, also in Okinawa Prefecture.

Suga should sincerely face up to what Tamaki said.

The central government has overridden Tamaki’s objection in starting landfill work at Henoko, but the future of the relocation plan now looks uncertain because soft seabed has been discovered beneath part of the work site.

It would take as long as 12 years for the work to be completed even if it were to proceed according to Tokyo’s plans.

The various problems arising from the presence of the Futenma air station in the midst of an urban area should by no means be left ignored during that period of time.

Tamaki called for a framework of dialogue to be set up between the central and prefectural governments. Tokyo argues, in the meantime, that there already exists a similar framework.

But the “Council for Promoting the Alleviation of the Burden of Futenma Air Station,” which the central government has in mind, has not met for 18 months despite requests by the governments of Okinawa Prefecture and Ginowan, the host city.

The council was set up in 2014 under the governorship of Hirokazu Nakaima, who gave the green light to the Henoko landfill work. It initially met three times a year, but convened only once during the four years of the subsequent governorship of Takeshi Onaga, and only once more under Tamaki, who is in his third year as governor.

Whether the council will meet or not should not be decided on the basis of whether the governor of Okinawa Prefecture is compliant with Tokyo’s policy line.

Onaga was tough in confronting the central government. In a slight departure from that style, Tamaki has repeatedly called on Tokyo for dialogue, while at the same time remaining heir to Onaga’s “no to Henoko” stance.

Tamaki has also proposed creating a framework for tripartite reviews and discussions by Tokyo, Washington and Okinawa Prefecture on the overall circumstances surrounding the presence of U.S. military bases in the southern prefecture.

Tokyo has said it will do everything in its power to reduce the burden of the U.S. military bases. If it really wishes to do so, the problem of the Futenma air station should be one of the major issues to be addressed before everything else.

Tokyo should steadily eliminate factors that are posing threats to the lives and health of residents, including by having part or all of military drills relocated from there and by ensuring that no aircraft be allowed to fly above schools and day care centers for children.

The proposed design change includes, for example, collecting nearly seven times the initially planned amount of sea sand to cope with the soft seabed and procuring earth for landfill not just from northern Okinawa Prefecture, as initially envisaged, but from all areas across the prefecture.

Tamaki is unlikely to approve the change in design, which would inevitably entail devastating the environment. That does not, however, justify doing nothing about the danger being posed by the Futenma air base.

Suga made no in-depth remarks during the Oct. 7 meeting, which lasted only five minutes or so, according to officials.

Suga was the central driver of the Henoko relocation plan when he served as chief Cabinet secretary under Shinzo Abe, his predecessor as prime minister. Suga took a high-handed stance then on the matter, such as by allocating generous regional development budgets to parties who are cooperative with Tokyo and giving the cold shoulder to those who aren’t.

That carrot-and-stick policy has sowed division in communities and among residents of Okinawa Prefecture and has also created a deep rift between the prefecture and Tokyo. Steady and truthful dialogue is the only way for unraveling the emotional entanglement.

Future development of the issue hinges on how Suga approaches the matter.