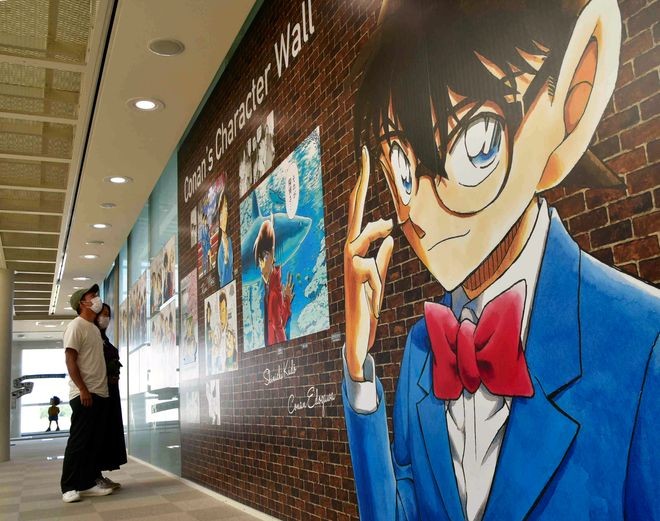 TOTTORI--Tottori Airport introduced yet another set of decorations themed on “Detective Conan,” including a 21-meter stretch of wall featuring 60 characters from the mystery manga series in the International Terminal building.

In addition to the Character Wall, a Kids’ Corner section was built on the second floor of the building.

“We hope visitors enjoy finding their favorite characters and taking pictures with them while they take precautions against infections,” a prefectural official said.

The Kids’ Corner remains closed for the time being to prevent the spread of the new coronavirus, but visitors can take pictures in front of the section, officials said.

The Kids’ Corner is themed on the Beika Kindergarten where the protagonist, Shinichi Kudo, aka Conan Edogawa, meets the heroine, Ran Mori, for the first time in the manga, which is also known as “Case Closed.”

The airport is nicknamed the “Tottori Sand Dunes Conan Airport.” Gosho Aoyama, the creator of the manga series about the boy detective, was born in Hokuei, Tottori Prefecture.

Even non-fliers have been attracted to the statues and optical illusions inspired by Conan characters that adorn Tottori Airport.

Wi-Fi signs with different characters are posted on 27 locations at the airport. Characters are also depicted on the doors of toilet stalls.