Rising number of elderly in arrears on nursing care insurance 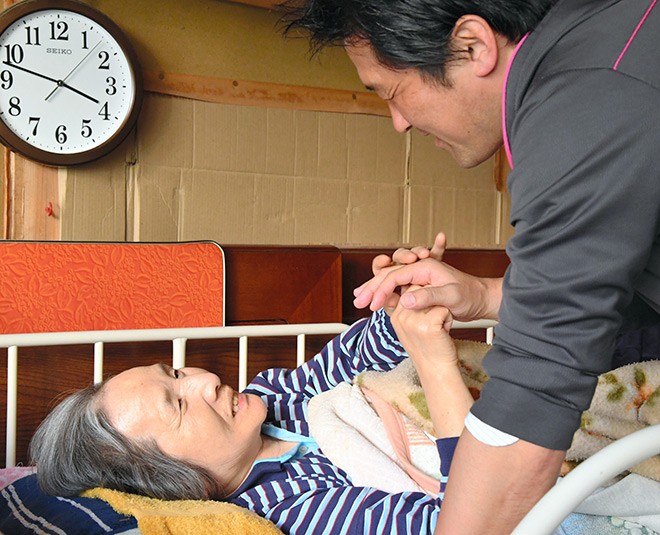 A caregiver tends to an elderly woman in need of nursing care in Koriyama, Fukushima Prefecture. (Asahi Shimbun file photo)

A growing number of elderly people are having their savings or property seized for failing to pay their insurance premiums for the public nursing care system, according to new government research.

The trend is expected to continue as Japan’s population ages, putting more demand on the service and pushing premiums up even higher, resulting in even more people unable to make the payments.

The number of people who had their savings or property seized because they defaulted on payments reached a new high of 19,221 in fiscal 2018, according to a recently released health ministry survey.

A key reason behind the trend is that the payments are weighing heavily on those aged 65 or older. Premiums have almost doubled since fiscal 2000, when the public long-term care system kicked in.

The survey by the Ministry of Health, Labor and Welfare involved all 1,741 local governments across Japan, including Tokyo’s 23 wards.

Of these, 90 percent had their premiums deducted from their national pensions.

But the remaining 10 percent are billed directly for the service because they receive less than 180,000 yen ($1,705) annually from their national pensions--not enough for the deductions.

Under the current setup, welfare recipients are provided both welfare benefits and money to make payments for nursing care insurance premiums.

Most of the people whose assets fell under seizure are believed to not have access to welfare benefits and additionally cannot pay their premiums due to their paltry pensions, according to the ministry.

Yasuhiro Yuki, a professor of social security at Shukutoku University, said a new welfare program should be made available to them, as the problem is expected to only grow in the coming years with the COVID-19 pandemic further straining their prospects.

“The amount of nursing care insurance premiums is expected to surge in the future and the proportion of nonregular employees remains high,” he said. “More and more people will end up having their assets seized or being slapped with a penalty.”

The value of premiums in arrears for those aged 65 or older stood at about 23.6 billion yen in fiscal 2018.

Premiums for that age bracket come under review every three years.

The premiums are ballooning as more and more senior citizens rely on the nursing care service due to the country’s rapidly graying population.

The public nursing care service is provided by local governments, and premiums vary from one area to another.

It is projected to reach 7,200 yen in fiscal 2025, once the entire postwar baby boom generation falls into the 75-or-older age bracket.

When people fall behind on paying their premiums, they will receive a written notice from their local government.

If they are still failing to make payments, local authorities will seize their savings or property to cover the unpaid amount.

Those using the nursing care system can still use the service even if they default on their payments, but their fees will increase.

Some local governments require them to pay 30 percent of the cost for the service, rather than the normal 10 percent.

Local officials must first designate a person as requiring the care service before they can become eligible for it.

And some local governments exempt low-income households from paying premiums.

It is up to local authorities whether to follow through with seizing the assets of someone in arrears.