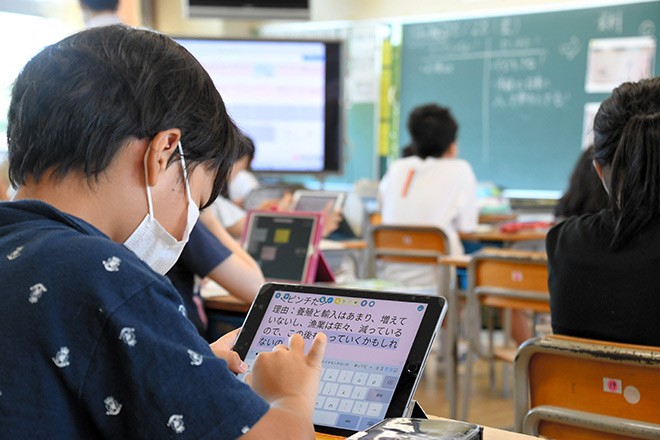 A student at Niigata Elementary School affiliated with Niigata University in Niigata types his opinion onto a tablet device during a social studies class. Pupils submit their comments online to be shown on the screen beside the blackboard. (Akihito Ogawa)

Economic fallout from the COVID-19 pandemic has dealt a heavier blow to children of low-income households and further widened educational inequalities, according to a major Japanese think tank.

In a report, Mitsubishi UFJ Research and Consulting pointed out that parents’ employment and incomes are less secure than before while children have had fewer opportunities to study because of nationwide school closures in the spring.

It noted that the loss of students' educational opportunities should be minimized.

“A correlation between economic disparities and children’s academic skills had already been seen even before the pandemic, but the school closures have further widened the gap,” said Yohei Kobayashi, a senior research fellow at the think tank’s Economic Policy Department. “The current online education offerings have failed to serve as a substitute for in-person classes, so it’s important to provide not only study materials but also feedback and other forms of support (for children).”

Mitsubishi UFJ Research and Consulting conducted an online survey of households with elementary, junior high or high school children between June 8 and 12 and received 2,000 valid responses. It published the analysis of the results on Aug. 21.

Respondents were asked if their employment status had changed since February, when the novel coronavirus started spreading in the country.

Of male nonregular workers, 26.2 percent said they have left or changed jobs. That was eight times the figure for their counterparts with regular work status and corporate executives who said so, at 3.4 percent.

While 16.4 percent of respondents whose annual incomes are below 2 million yen ($18,940) said their monthly household incomes fell from January through May, the figure for those with annual incomes of 10 million yen or more was less than 10 percent.

That means more people with lower incomes saw their earnings decline than those with higher incomes.

“The pandemic has had a huge impact on nonregular workers, whose job security was fragile even before the health crisis, and on self-employed individuals,” Kobayashi said. “The lower the income, the greater the drop in monthly earnings.”

During the pandemic, the need for information technology devices for remote learning also increased since most schools in the country temporarily closed at the central government’s request to contain the spread of infections.

About 30 percent of households whose annual incomes are less than 4 million yen and single-parent households said they do not have computers and tablet devices, showing the gap in the availability of IT devices between the rich and poor.

The survey also found children who performed poorly at school have been studying a total of 18 hours per week since their school closures, only half the number of hours they spent before the shutdowns.

The drop in the number of study hours was smaller for children who had good grades before their school closures.