ANA to allow employees to sign outside contracts for extra income 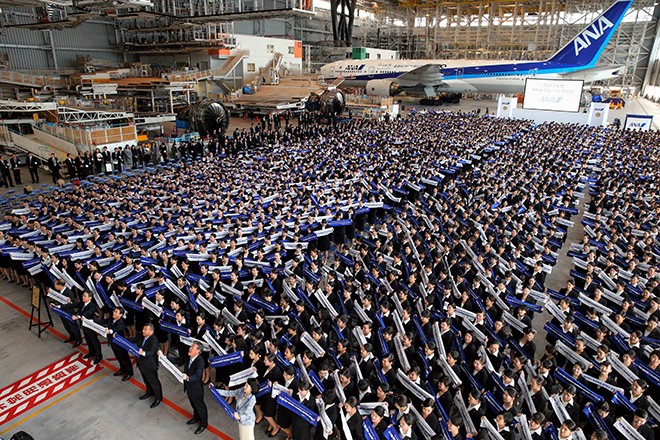 A ceremony welcomes new employees of All Nippon Airways Co. and other group companies inside a hangar at Haneda Airport in Tokyo in 2017. (Asahi Shimbun file photo)

All Nippon Airways Co. (ANA) decided to let its employees sign contracts for side businesses to supplement their income amid the COVID-19 pandemic, the first such move among major carriers, sources said.

The spread of the novel coronavirus has slashed demand for commercial flights, and ANA plans to reduce salaries to save costs in the continuing health crisis.

Under ANA’s new plan to help its employees survive financially, they will be allowed to sign part-time employment contracts with other companies while continuing to work at ANA. The airline said it aims to use the experience and skills the employees gain through the side businesses.

The airline company has until now allowed employees to conduct side businesses but only as sole proprietors, such as private tutors. Few employees have worked outside the company.

However, the effects of the pandemic may now force them to seek extra income.

All 15,000 employees of the airline, including pilots and flight attendants, will be eligible for the new side business measure, which is expected to begin in 2021.

The measure will also be considered for all companies under the umbrella of the parent company, ANA Holdings Inc.

ANA has proposed the policy to its labor union. Management and the labor union will flesh out the details of the new arrangement.

The airline earlier informed the labor union that it will withhold winter bonuses and reduce base salaries to decrease personnel costs. ANA’s cost-cutting measures this year will result in an average 30-percent reduction in employees’ annual salaries.

ANA predicts that it will save more than 10 billion yen ($94.75 million) through the measures.

The airline will also downsize its routes by concentrating its domestics flights mainly on major airports, such as Tokyo’s Haneda and Osaka’s Itami airports. It will also review unprofitable international flight routes.

And it plans to sell some of its aircraft.

Large companies are increasingly allowing their employees to work side jobs as the number of teleworkers has increased during the pandemic.
However, many companies still only allow them to work as sole proprietors outside their normal working hours.

Konica Minolta Inc., an electric equipment manufacturer, is one of the few companies that permits its employees to sign outside employment contracts with others.