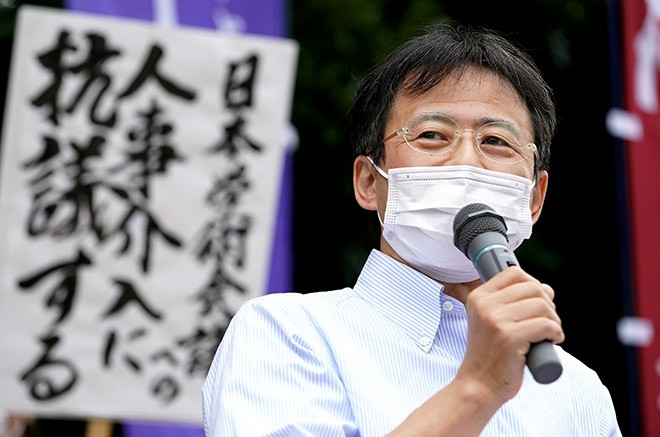 Masanori Okada speaks during a protest against Prime Minister Yoshihide Suga’s rejection of six candidates for membership to the Science Council of Japan outside the prime minister’s office in Tokyo on Oct. 3. (Asahi Shimbun file photo)

Prime Minister Yoshihide Suga has repeatedly used the phrase “sogoteki-fukanteki” in his recent statements. What does it mean?

The dictionary defines “sogo” as “sum up separate entities” and “fukan” as “look at the whole picture.”

In short, the phrase roughly means “see the forest for the trees.”

Suga says he rejected six recommended scholars for membership to the Science Council of Japan “from the standpoint of ensuring the council’s sogoteki-fukanteki activities.”

That is tantamount to saying those six scholars are incapable of seeing the big picture.

From what sort of close examination of their scholarship did Suga arrive at that conclusion?

Judging from what I know of the words and actions of the six scholars, I am fairly certain that the Suga administration is using sogo and fukan in a substantially different meaning from what the dictionary says.

For instance, Masanori Okada, professor of administrative law at Waseda University, has been critical of the government’s policy concerning U.S. bases in Okinawa Prefecture.

When the government had the land minister, an “insider,” rule on the validity of an Okinawa governor’s decision through an administrative hearing system to force through the Henoko reclamation project, Okada objected to the move as an “abuse of the system.”

For refusing to compromise his academic convictions and by speaking his mind, Okada is probably seen by the administration as being incapable of seeing the big picture.

If acquiescing to whatever the government says and does is being sogoteki-fukanteki, that negates the function of the Science Council of Japan, which is to propose policies from an independent viewpoint.

The two kanji characters for fukan denote “hang one’s head” and “look down,” respectively. It is as if the Suga administration is telling everyone to “just look down and remain silent.”

Some expressions are used to obfuscate and throw people off the track. A typical example is “shohan no jijyo wo kanan shite,” which translates as something like “taking various factors into consideration.”

Suga probably thinks of sogoteki-fukanteki as one such convenient phrase.

But it makes the nature of his administration crystal clear instead of befuddling the public.