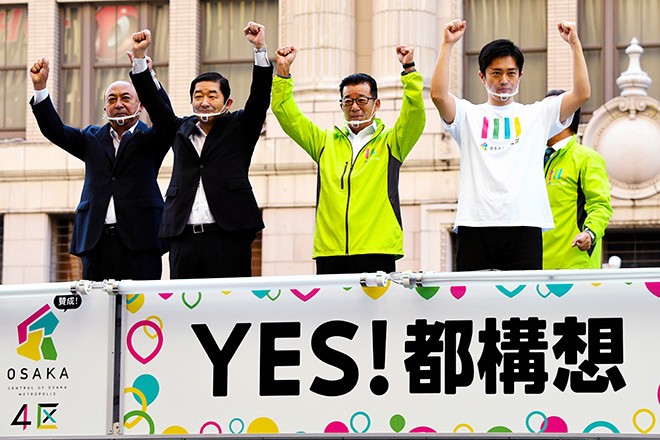 Ichiro Matsui, leader of Osaka Ishin no Kai, second from right, and Hirofumi Yoshimura, its acting leader, right, call for voters to support the Osaka metropolis plan as they campaign in Osaka on Oct. 12. (Nobuhiro Shirai)

OSAKA--Campaigning has kicked off in earnest in a referendum on whether to reorganize Osaka city into a metropolitan-style government like Tokyo's.

Campaigning officially started in Osaka on Oct. 12 in the second and likely final referendum of its kind, just three weeks before the Nov. 1 vote.

With the starting pistol fired, both supporting and opposing groups launched out of the gates in full force.

“The Osaka metropolis plan will further grow the economy in Osaka,” he said during a speech he delivered on the street in front of the city’s Nankai Namba Station. “We will shift regional-scale duties from the city government to the prefectural government, and we will make progress swiftly to achieve our goal.”

The Osaka prefectural chapter of the Liberal Democratic Party is opposing the plan. Taeko Kitano, a senior LDP member of the Osaka city assembly, said the plan would hurt delivery of services to the public.

“We believe the plan will downgrade the quality of services for residents, so we oppose the idea,” she said in a speech in Osaka Castle Park. “We will achieve the stability required for growth by letting Osaka city survive.”

If the plan wins majority approval, the Osaka city government, officially designated as a major city by ordinance in 1956, will be the first among such major cities to be abolished.

This is the second referendum held over the plan, after the original proposal was rejected by a narrow margin in 2015.

Matsui said there would not be a third referendum if the proposal is defeated again.

Matsui is staking his career on the vote. If it is rejected, he said he would leave the political world after serving out the rest of his term as Osaka mayor, set to expire in 2023.

The Osaka metropolis plan proposes to dissolve the legal entity of Osaka city in January 2025 and replace it with four special wards similar to Tokyo’s 23 wards.

Responsibilities where the jurisdiction or administrative functions of the two levels of government overlap, such as infrastructure development and economic growth strategies, would be shifted from the city government to the prefectural government.

The new special wards would handle services closely related to the daily lives of residents, such as providing support for raising children and education.

Part of the city’s financial resources would also be shifted to the prefectural government.

VOX POPULI: Europe in grip of a second wave, so what to make of Japan’s ‘success’?