The upper body of Evangelion Unit-01 is unveiled at the Toei Kyoto Studio Park in Kyoto's Ukyo Ward. (Yuki Shibata) 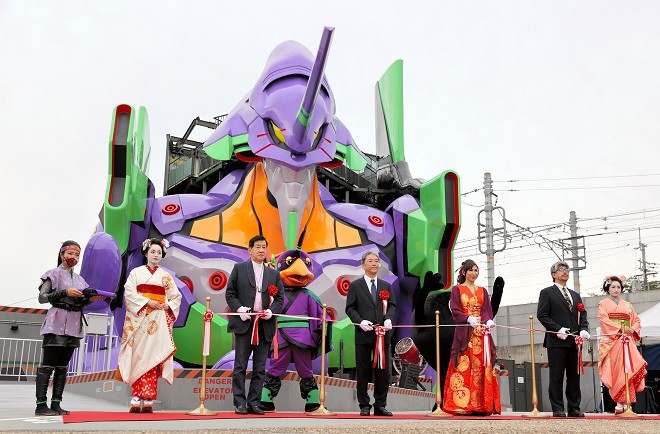 Singer Yoko Takahashi, third from right, and Toei President Osamu Tezuka, center, cut the ribbon during the ceremony to unveil the new attraction, the Evangelion Kyoto Base, at the Toei Kyoto Studio Park on Oct. 3. (Yuki Shibata)

KYOTO--The world's first attraction that lets fans climb inside the Evangelion Unit-01 robot of the Evangelion anime franchise was unveiled with much fanfare at the Toei Kyoto Studio Park in the city's Ukyo Ward.

Called the Evangelion Kyoto Base, it features a 15-meter-tall statue of the robot's upper body rising from a pool filled with red water.

Visitors can stand on its palm to take photos and hop into the "entry plug," a capsule-like cockpit for the robot's pilot.

Clad in a dress modeled after an "uchikake" kimono, she sang "A Cruel Angel's Thesis" while standing on Evangelion's palm.

For inquiries, visit the park's official website at (https://www.toei-eigamura.com/global/en/).