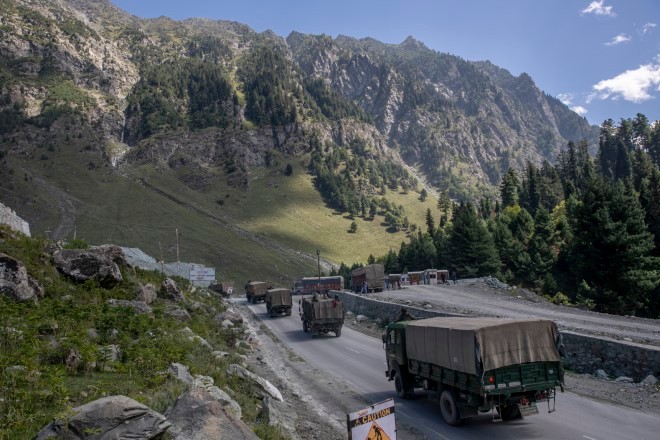 In this Sept. 9, 2020, file photo, an Indian army convoy moves on the Srinagar-Ladakh highway at Gagangeer, northeast of Srinagar, Indian-controlled Kashmir. (AP Photo)

NEW DELHI--Indian and Chinese military commanders held “positive, constructive” discussions on disengaging troops locked in a months-long standoff at their disputed Himalayan border, the two sides said in a joint statement on Tuesday.

Diplomats and military officials have held several rounds of talks to pull back from the brink after a clash erupted between border troops in June in which 20 Indian soldiers were killed.

On Monday, senior commanders held a seventh round of talks at Chushul in the western Himalayas that went on for more than 10 hours, officials said.

“The two sides had a sincere, in-depth and constructive exchange of views on disengagement along the Line of Actual Control in the Western Sector of India-China border areas,” the statement released by the Indian government said.

“They were of the view that these discussions were positive, constructive and had enhanced understanding of each other’s positions,” the joint statement said.

The Line of Actual Control is the de facto border where troops are ranged against each other.

The trouble began early in April when New Delhi says Chinese troops intruded deep into India’s side of the LAC in the Ladakh sector which adjoins the Tibetan plateau.

Beijing claimed the area to be its territory and blamed Indian road construction activity in the area for destabilizing the situation.

So far there has been no sign of a troop pullback even though winter is approaching and the area is considered uninhabitable.

“Both sides agreed to maintain dialogue and communication through military and diplomatic channels and arrive at a mutually acceptable solution for disengagement as early as possible,” the two sides said in the joint statement.