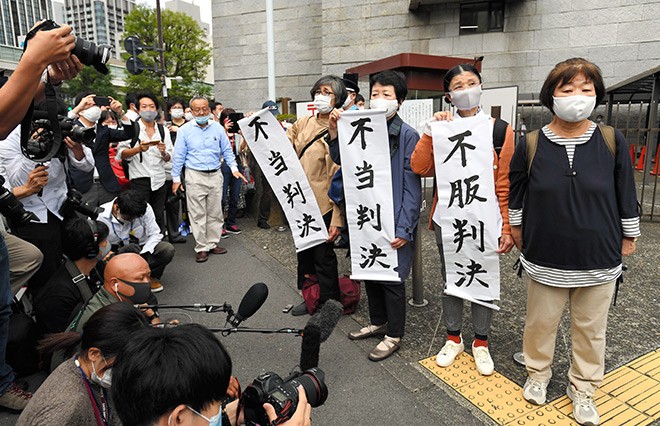 The Supreme Court dealt a blow to workers struggling to survive on temporary contracts with a decision Oct. 13 that it is not “unreasonable” for employers to treat them differently from regular employees by not awarding bonuses and retirement benefits.

The decision overturning lower court rulings concerned two cases. One was filed by four former contract workers of a subsidiary of Tokyo Metro Co., operator of the capital’s subway system. The other was brought by a nonregular worker who spent two years with Osaka Medical and Pharmaceutical University in Osaka Prefecture.

In the first case, the plaintiffs, women aged 66 through 73, argued that their employer’s denial of retirement allowances after working at kiosks for 10 years or so breached Article 20 of the Labor Contract Law.

The article prohibits any “unreasonable disparity” in work conditions between regular and nonregular workers.

The court’s Third Petty Bench acknowledged that the tasks of regular and nonregular workers are “basically similar,” but pointed out that job responsibilities are not the same as regular workers fill in for nonregular workers when they are absent from work while others oversee the operations of several kiosks.

It stated that the company’s system of paying retirement benefits is meant “to secure personnel who can perform duties as regular employees.”

For this reason, the court concluded it is not “unreasonable” to set different working conditions, overturning the 2019 Tokyo High Court decision that ordered the payment of compensation equivalent to 25 percent of retirement allowances paid to regular employees.

One of the five justices on the petty bench, however, gave a dissenting opinion.

“Contract workers are entitled to retirement money as the payment is in part intended to reward them for working for many years, (regardless of their job status),” noted Katsuya Uga, formerly a professor of administrative law at the University of Tokyo.

Uga said the disparity in working conditions was “unreasonable” in this case as their tasks “are not much different from those of their regular status counterparts.”

The second case centered on the legitimacy of denying bonuses to a woman who worked for about two years at Osaka Medical and Pharmaceutical University.

The woman, who is in her 50s, worked full time from 2013 to manage the schedules of faculty members and greet guests.

But the bench ruled that withholding her bonus was not illegal as regular workers performed jobs across a broader range than hers, including editing an academic journal.

The bench also noted that regular staff can be transferred to positions beyond the limited scale available to nonregular employees and that the university had a system for nonregular workers to be elevated to regular status if they wished.

In the 2019 Osaka High Court ruling, the plaintiff was awarded a payment equal to 60 percent of the bonus given to regular workers.

Yuichiro Mizumachi, a professor of labor law at the University of Tokyo’s Institute of Social Science, cautioned that the top court ruling could offer a loophole for businesses to withhold allowances to nonregular employees.

“The court should have based its decision on a close examination of the method of determining pay and actual pay in the cases, rather than accepting the subjective intent to secure personnel for regular status,” he said.

A wide wage gap exists between regular and nonregular workers in Japan.

The average annual income for nonregular employees, including a bonus or allowances, stands at 1.75 million yen ($16,600), according to the Statistical Survey of Actual Status for Salary in the Private Sector in 2019 by the National Tax Agency.

The figure for regular employees is 5.03 million yen.

Given the difficulties facing these workers, the Labor Contract Law was revised in 2013 to prohibit “unreasonable differences” in pay and other working conditions between fixed-term contract workers, including part-time workers, and regular workers.

Whether the difference is unreasonable or not is supposed to be assessed on the nature of the work being done and if the individuals are subject to personnel transfers.

In 2018, the top court ruled that it is illegal for an employer not to provide certain benefits, including a commuter allowance, to nonregular workers.

A 2014 survey by the labor ministry showed that 86 percent of regular employees receive some form of bonus. It also found that more than 80 percent will be paid retirement benefits.

In contrast, only 30 percent of nonregular workers could expect bonuses and less than 10 percent will be paid retirement benefits.

There were fears that the top court’s ruling could bring a standstill to past efforts to reduce the wage disparity if businesses cite it as grounds for denying the payment of bonuses and retirement allowances to nonregular workers.

But Kotaro Kurashige, a lawyer well-versed in labor issues involving management, pointed out that the decision concerned only the two cases and cannot be applied to other cases.

“The ruling made it even more crucial for businesses to clearly explain differences in terms of job descriptions and area of responsibility” between regular employees and nonregular employees, he added.

Caution urged in assessing Avigan as treatment in COVID-19 cases

Europe in grip of a second wave, so what to make of Japan’s ‘success’?