Australia’s Westpac to exit China, other Asia markets as focus swings to home 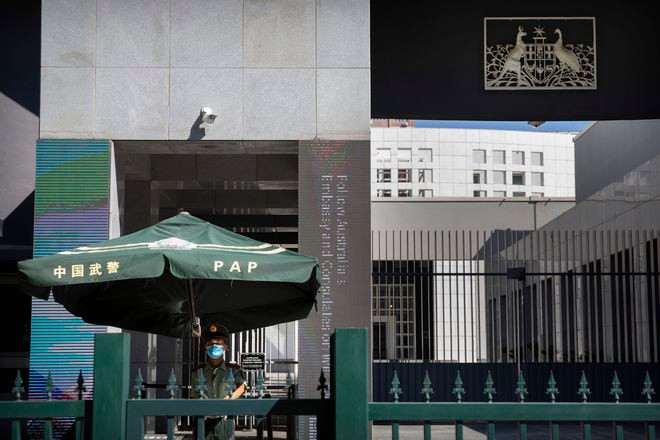 A Chinese paramilitary policeman stands guard at the Australian Embassy in Beijing on Sept. 1. (AP Photo)

SYDNEY--Australia’s Westpac Banking Corp is exiting banking operations in China and some other Asian markets to focus on its core domestic and New Zealand businesses, as it grapples with capital constraints amid the COVID-19 pandemic.

The country’s second-largest lender, whose capital has been eroded by a record lawsuit settlement and a surge in bad-debt provisions due to the pandemic, said on Wednesday it will exit operations in Beijing, Shanghai, Hong Kong, Mumbai and Jakarta, where it does business with institutional clients.

It will instead consolidate its international operations into branches in Singapore, London and New York.

Under pressure from regulators to increase their capital bases, and from investors to show higher returns from their investments, Australian banks have been selling non-core assets, including their offshore operations.

Following a failed big push to Asia under its previous CEO, Westpac’s rival Australia and New Zealand Banking Corp. in 2016 exited operations in Singapore, Hong Kong, Vietnam and Taiwan. The Melbourne-based bank now lends only to big corporate clients in the region.

Westpac’s move is expected to impact between 150 to 200 staff, mostly based in Shanghai and Hong Kong, and will be done in stages taking between 12 to 24 months to complete, a person familiar with the bank’s plans told Reuters.

With one of the weakest capital positions out of the four major banks that dominate the local industry, Westpac said the changes will not affect its cash earnings materially but will help improve capital efficiency by reducing its risk-weighted assets by over A$5 billion ($3.6 billion).

“These are the actions of a bank that is capital-constrained,” said Brian Johnson, senior banking analyst at Jefferies in Sydney. “This will release capital even if it won’t have much impact on earnings.”

Westpac shares fell 1.4 percent on Wednesday, in line with the sector which underperformed the broader market’s 0.3 percent loss on the day.

The bank’s move comes as relations between Australia and China continue to sour, following Australia’s call for an independent inquiry into the origins of the novel coronavirus--which first emerged in China.

Westpac has been hit by steep costs from a money-laundering lawsuit settlement and a surge in charges for bad loan provisions due to the coronavirus outbreak, triggering a review of its underperforming wealth, pension investments and Fiji and Papua New Guinea banking units earlier this year.