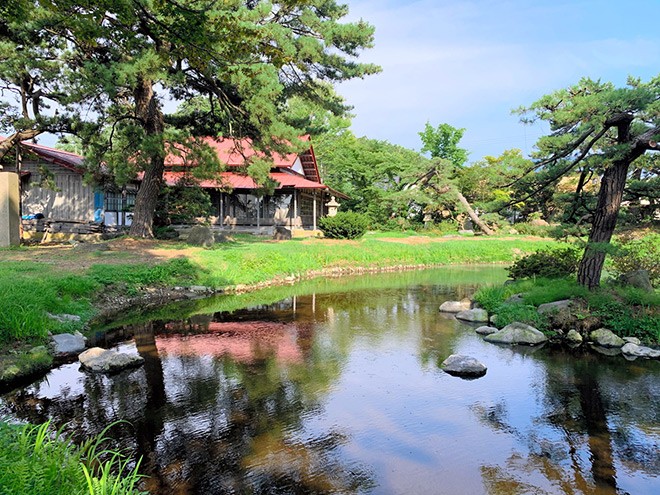 The Shimuan annex building of the Miyakoshi House seen at the back of the water garden was apparently inspired by the Hakusasonso house in Kyoto. (Provided by the Nakadomari Museum)

NAKADOMARI, Aomori Prefecture--Research into a historic estate here is revealing the extent of influence of the artistic and cultural styles during the Taisho Era (1912-1926).

A trove of valuable properties, including 100-year-old stained glass masterpieces by renowned artist Sanchi Ogawa (1867-1928), has been found at the residence of the Miyakoshi family.

Town officials set up a committee to preserve and utilize Miyakoshi House last year. They have been conducting a survey on the annex building built by Masaharu Miyakoshi (1885-1938), the book repository standing north of the building and the gardens surrounding the building.

Masaharu, the family’s ninth-generation head, had many cultural figures among his acquaintances. The family was a large landowner and owned a house in Tokyo’s Nakano district.

Miyakoshi House, with its artifacts influenced by the Taisho Romanticism movement, is scheduled to open to the public for the first time next spring. A limited number of visitors will be allowed on a trial basis between Nov. 2 and Nov. 29.

Masaharu’s great-grandson, Yutaka Miyakoshi, who owns and lives in Miyakoshi House, was behind the decision to open the estate.

“It appears as if Masaharu had built an embodiment of what he had in his head, his vision,” said Yutaka, 61, who runs a grain shipping business. “I decided to open the house to the public so that children can feel confident about this town, saying that it has good things to offer.”

Masaharu tapped Ogawa, then a budding craftsman, to create three stained glass pieces when he built the Shimuan annex building, which has a floor space of 229 square meters, in 1920.

Four-panel stained glass sliding doors in the summer guest room, composed with the "shakkei" (borrowed scenery) technique, feature kobus magnolia and hydrangea to create a harmony with the garden outside.

A round stained glass window in the hallway is rendered with a sailboat floating on what appears to be Lake Jusanko in Aomori Prefecture, while the bathroom is decorated with a Japanese willow with a common kingfisher perched on a branch.

“Ogawa’s masterpieces have been kept intact in their original forms for 100 years” said stained glass historian Chiyo Tanabe. “They are national treasure-class works.”

Researchers have also discovered that the gardens were inspired by the Hakusasonso house in Kyoto built by Japanese-style painter Kansetsu Hashimoto (1883-1945), a close friend of Masaharu.

Town officials have compiled a list of about 6,500 artifacts, identified while analyzing documents and other materials at the estate.

Major finds include a postcard penned by Yumeji Takehisa (1884-1934), a leading painter of Taisho Romanticism, in 1919.

Seven boxful of letters were found in the book repository, including those from celebrated painters, such as Taikan Yokoyama and Kanzan Shimomura, and noted authors, such as Koyo Ozaki and Rohan Koda.

Numerous valuable items were found in Shimuan and in the repository, including “fusuma” sliding door panels replete with images from the early Edo Period (1603-1857), transom sculptures and tea utensils.

“We will show the entire extent of the cultural assets kept in abundance in the repository,” said Nakadomari Mayor Toyomitsu Hamadate. “We can expect to learn how our economy and business community worked at the time from viewing them.”

To prevent novel coronavirus infections, visitors are limited to 150 per day and divided into 10 groups of up to 15 participants in November. Each guided tour lasts about one hour.

Tickets cost 1,000 yen ($9.50), including tax, and are available at the town’s general culture center called Parunasu and on the town’s website at (http://www.town.nakadomari.lg.jp/miyakoshi/index.html).