Supercomputer finds safest way to sit and chat while eating out

Researchers use the supercomputer Fugaku to calculate how many droplets exhaled from a diner at a restaurant would reach another at the same table when talking, depending on where they sit. (Provided by Riken Center for Computational Science, Toyohashi University of Technology and Kobe University. Supported by Kyoto Institute of Technology, Suntory Liquors Ltd. and Toppan Printing Co.) 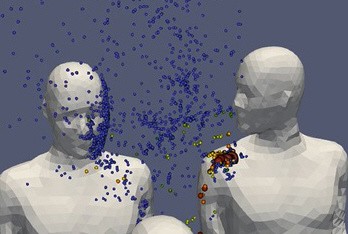 In this simulation, a person, left, receives an estimated five times more droplets exhaled from the person they are sitting next to when talking at a restaurant than when they are sitting across from each other. (Provided by Riken Center for Computational Science, Toyohashi University of Technology and Kobe University. Supported by Kyoto Institute of Technology, Suntory Liquors Ltd. and Toppan Printing Co.)

Next time you dine out with a friend, you may want to think carefully about the seating pattern you end up with.

Simulations by the world’s fastest supercomputer suggest that a person is more likely to be exposed to the coronavirus through droplets if they sit next to their dining partner and turn their head to talk than if they sit across from each other.

It found a person is exposed to five times as many droplets when being spoken to if they are sitting side by side than when sitting directly across from each other.

A research team from the Riken Center for Computational Science and other institutions crunched the numbers using Japan’s supercomputer Fugaku, which ranked as the fastest in the world in June for its calculation speed. The researchers announced the results on Oct. 13.

It looked at three key scenarios: sitting across from each other, sitting side by side and sitting diagonally apart.

The researchers simulated the spread of droplets when four people sit across from each other at two joined tables with one talking to one another while looking at their face for about a minute. Each table measured 60 centimeters square--the standard size used at restaurants.

When the person talks, about 5 percent of the droplets they exhale will reach their conversation partner, but then micro droplets also spread to the other people at the table.

But the best results were from sitting diagonally across from each other.

When a person spoke to someone diagonally across the table, about 75 percent fewer droplets reached them compared to the previous scenario.

“It’s very effective to sit diagonally in front of each other (in preventing the spread of droplets),” said research team leader Makoto Tsubokura, a professor of computational science at Kobe University.

He said diners can reduce the risk of coming into contact with droplets from others by ensuring they do not turn sideways to talk to each other when they sit side by side at a restaurant counter.

Tsubokura suggested that restaurants should install mirrors in front of diners to allow them to safely converse with each other.