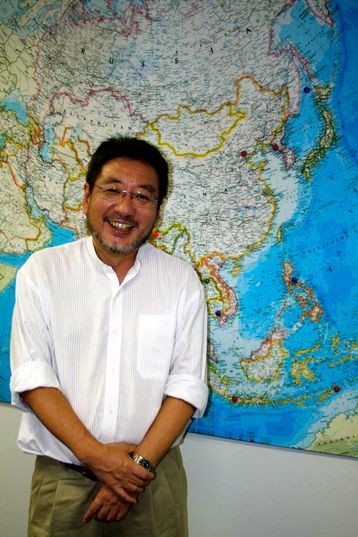 Kenro Oshidari in Bangkok in May 2006 (Asahi Shimbun file photo)

But its on-site activities are severely handicapped by a lack of needed funding and equipment, according to "Kokuren de Mananda Shuraba no Riidaashippu" (What I learned at the United Nations about leadership on a scene of carnage), a book by Kenro Oshidari whose service at the WFP spanned a quarter century.

During the Bosnian War, no bulletproof vehicles were available for an inspection tour of a conflict zone. Assigned only a regular vehicle, Oshidari's team had to race through a street at full speed, dodging bullets flying from both sides from two hostile forces.

During the Kosovo conflict, the refugee camp was so overcrowded that there was not even any space for baking bread with the wheat being delivered by the WFP.

And in politically volatile Cambodia, his team literally risked their lives to bring relief supplies to an anti-government village.

But food must be delivered precisely because doing so is dangerous and that is what the WFP, the recipient of the 2020 Nobel Peace Prize, keeps doing.

Amid the COVID-19 pandemic, the organization has continued to deliver food despite logistical problems, and is said to be also supplying soap and other relief goods.

“Until the day we have a medical vaccine, food is the best vaccine against chaos," said WFP chief David Beasley.

I cannot quite shake off my sense of ambivalence about the Nobel Peace Prize going to this U.N. organ, as its contribution to peace and humanitarian causes is taken for granted.

But then, even such an obvious premise is becoming shaky in today's international community. The Nobel Peace Prize must be sounding the alarm, so to speak, at the disrespect with which the United Nations is being treated, especially by the United States.

Sadako Ogata (1927-2019), the head of the office of the United Nations High Commissioner for Refugees (UNHCR) from 1991 to 2000, famously stated, "Peace that exists solely in your country is no peace, because every nation's fate is bound up in that of others."

Her words could not be more welcome amid the "my country first" mentality that is so prevalent today.