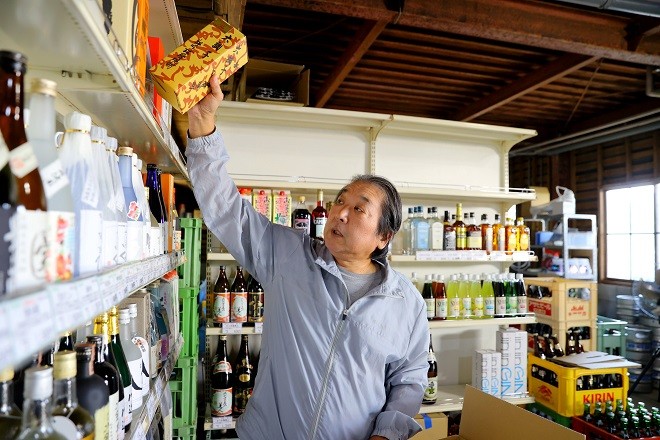 The Japanese-style bar was engulfed in flooding from the nearby Kumagawa river, when southern Kumamoto Prefecture was hit by torrential rain in July.

“All was swept away in an instant,” said the 64-year-old pub manager, who had done business at the location for 20 years.

The torrential rainfall, combined with the pandemic, dealt a heavy blow to local businesses such as the izakaya, which are still being felt more than three months later.

The izakaya saw a dramatic plunge in sales amid the novel coronavirus spread, before business began gradually improving in June. It received the largest number of reservations this year on July 4, the day the flooding hit.

Instead of a landmark day for business, the manager could not hold back tears as he found food ingredients, alcoholic drink bottles and equipment stained with muddy water in his store after the water receded.

He said he now feels depressed simply by hearing the flowing waters of his once-beloved Kumagawa river.

The owner once considered resuming operations, but learned that he had to secure no less than several millions of yen (several tens of thousands of dollars) out of his own pocket even though he was eligible for a reconstruction subsidy.

Because the operator spent more than 10 years paying off the 12 million yen he borrowed to open the restaurant, he knows all too well the difficulty of repaying huge loans. Subsequently, the izakaya manager finally gave up reviving his shop.

“I may not be able to pay back the debt in a recession caused by the coronavirus outbreak, given my age,” said the man.

The pub owner’s home, which had been renovated just a few months before, was also inundated, forcing him to tear it down with public funds.

“I cannot believe such a thing happened to me,” said the manager. “My life turned 180 degrees in one day.”

On Oct. 4, three months passed since the calamity. But traces of the disaster, such as piles of scrap wood and broken show windows, still remain on the streets along the shopping arcade in the central part of Hitoyoshi, which is home to the eatery and was wholly damaged by the flooding.

Many stores are struggling to reopen, but some have dropped plans to restart their operations like the izakaya. There currently are no prospects for when the local economy can recover from the lingering effects of the disaster.

The Shodai liquor shop near the shopping street, which resumed its operations on Sept. 1, was inundated with nearly five meters of water.

As the residence on the same building’s second floor was also submerged, its third-generation president, Masasuke Shodai, 59, took shelter at his wife’s family home within the city of Hitoyoshi.

Following the disaster, many people from local shochu makers and other partner firms came to the liquor store to help it clean up the mess. The assistance gave Shodai the supportive push to reopen his shop.

“I wanted to give something back to them,” he said.

Shodai prepared presentation tables and chairs, along with shelves that had been washed and other articles essential for restarting business, in a storehouse that is temporally used for selling liquor products.

Many of the restaurants and other customers that often purchased from Shodai have suspended operations, leading to a reduced income and rendering it difficult for him to erase concerns about the future.

Shodai, however, is trying to keep his spirits high.

“Everyone is working to overcome the challenge,” he said. “I will help rebuild the town no matter how long it takes.”

According to the Hitoyoshi Chamber of Commerce and Industry, 900 of the 1,900 businesses in the city were affected by the flooding, and three operators shut down by Oct. 1 because of the rainfall.

“The number of closures could rise further, so we will assist in businesses’ reconstruction efforts with subsidies,” said a representative of the commerce chamber.

Referring to a subsidy program targeting small and midsize companies struggling to recover from the torrential rain, the Kumamoto prefectural government said no more than 17 operators have applied for the first round of the program.

That is, in part, due to the fact that most damaged businesses are tiny operations, long-established firms and those run by elderly individuals.