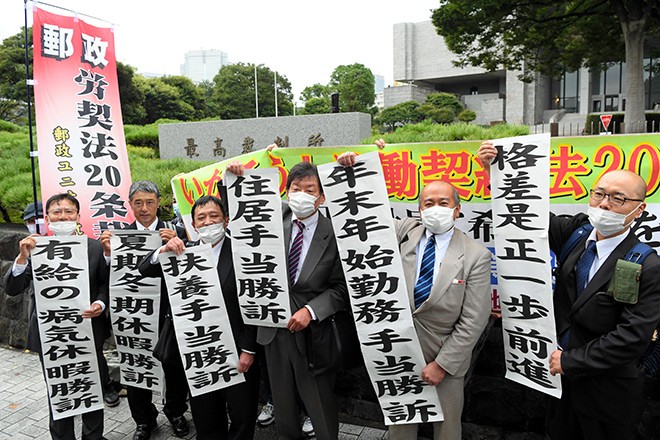 Nonregular workers at Japan Post Co. display banners about the Supreme Court's ruling in their favor on Oct. 15. (Shinnosuke Ito)

The Supreme Court sided with nonregular workers at Japan Post Co. by ruling Oct. 15 they are entitled to allowances and paid leave that regular workers take for granted.

The decision could have widespread ramifications for Japan Post because 184,000 or so of its 380,000-strong workforce are on fixed-term contracts.

The ruling covered appeals stemming from three lawsuits submitted by Japan Post contract workers who sought allowances and paid leave on a par with regular employees.

The First Petty Bench of the Supreme Court ruled on five issues, such as allowances for dependents and paid leave during the winter and summer vacations and decreed that nonregular workers were entitled to them.

The court ruled it was “unreasonable” to set different working conditions for nonregular workers, brushing aside Japan Post’s arguments that the allowances given to regular workers are based on the understanding they will work continuously.

The original lawsuits were submitted at district courts in Tokyo, Osaka and Saga by workers who mainly handled the collection and delivery of mail.

Eleven workers in the Tokyo and Osaka lawsuits argued that the gulf in employment conditions amounted to an “unreasonable disparity” that violated Article 20 of the Labor Contracts Law, and asked to be covered by 10 items pertaining to allowances and paid leave that were withheld.

The Saga worker filed the lawsuit on grounds no paid leave was given for winter and summer vacations.

The First Petty Bench ruled on five of the items and referred to a 2018 Supreme Court precedent that said unreasonableness should be determined for each specific item related to wages and other benefits.

On the issue of a dependents’ allowance, the Supreme Court ruled that although the plaintiffs had to renew their contracts every six or 12 months the company clearly expected those individuals to work on a continual basis.

Not paying the allowance given to regular workers despite being expected to work on a continual basis was deemed “unreasonable.”

Similar reasoning was cited in ruling that paid leave due to illness should also be provided to nonregular workers.

The court also ruled on allowances for the year-end and New Year period when post offices around the nation are frantically busy delivering mountains of New Year postcards.

It said the benefits amounted to compensation for working during that period, so there should be no difference between regular and nonregular workers.

Paid leave during winter and summer vacations was also meant to encourage employees to recharge, so nonregular workers were also entitled to receive such leave.

The Supreme Court ruling finalizes the case first brought at Saga District Court, but earlier rulings at the Tokyo and Osaka high courts were returned to those courts because the plaintiffs had sought compensation for being deprived of allowances and paid leave. The high courts will now be tasked with determining the proper amount of compensation.

Provisions in Article 20 of the Labor Contracts Law were incorporated in the law passed in 2018 that went into effect from April covering part-time and fixed-term workers.

The new law said judgments on unreasonable disparity in benefits should be made for each item on the basis of what each one entailed and its objective.

Japan Post, in a statement Oct. 15, pledged to negotiate with its labor union as soon as possible to make the necessary changes to its wage and benefits system.