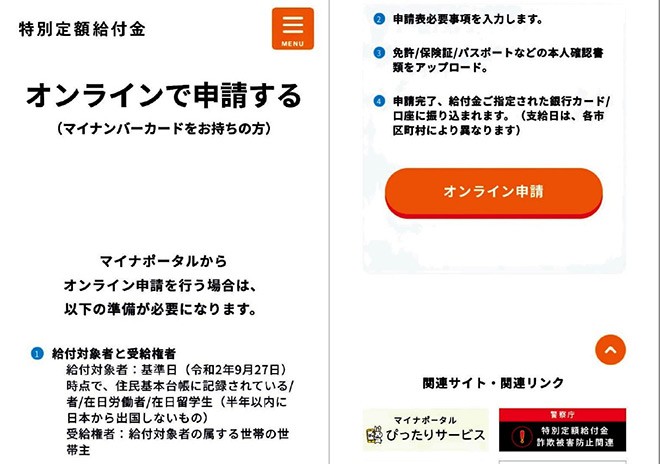 The government is warning the public about a fake cash handout application website. (Provided by the Ministry of Internal Affairs and Communications)

The government is warning the public that bogus emails allowing users to apply for a nonexistent second round of pandemic-related cash handouts are actually intended to steal personal information.

The Ministry of Internal Affairs and Communications said on Oct. 15 that the hoax emails appear to have been sent starting earlier in the day, and that it had received about 100 inquiries from the general public and municipal governments by noon.

The subject line on the emails says, “We established a special website for the second round of cash handouts.” The sender is listed as, “Ministry of Internal Affairs and Communications.”

The emails falsely claim that the Cabinet approved an emergency economic package that would provide 100,000 yen ($950) to each resident in Japan.

The emails contain a link to a website that can supposedly be used to apply for the cash. Users are asked to enter their personal information, such as name, address, driver’s license number and credit card number.

The government has already provided 100,000 yen to every resident in Japan since spring after the new coronavirus spread across the nation.

“As of now, we have not yet decided on anything,” Chief Cabinet Secretary Katsunobu Kato said at a news conference on Oct. 15.