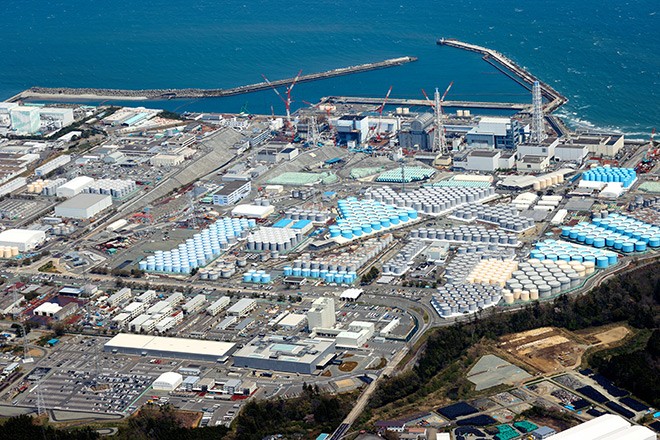 The government is moving toward the controversial disposal method for contaminated water at the crippled Fukushima No. 1 nuclear power plant of dumping it into the ocean.

Fishermen have fiercely opposed this disposal method at the plant, which experienced a triple meltdown in March 2011 following a magnitude-9.0 earthquake and tsunami, over fears of resulting negative publicity hurting their industry.

The central government is likely to hold a meeting of relevant Cabinet ministers before the end of October to make a formal decision on the dumping, sources said.

Before being dumped into the ocean, the stored water would be processed a second time and diluted with seawater to lower levels of radioactive materials below legally established standards.

It is expected to take about two years to prepare for the dumping process.

Water contaminated with radioactive materials continues to be produced at the Fukushima No. 1 plant at a daily rate of about 140 tons. Water used to cool melted spent nuclear fuel mixes in with groundwater that leaks into the reactor building.

Tokyo Electric Power Co., the operator of the plant, treats the contaminated water using equipment called advanced liquid processing systems, or ALPS, before storing the water in tanks on the plant grounds.

But about 1.2 million tons of processed water is being stored in tanks and TEPCO has estimated that tank capacity will be reached by the summer of 2022 even under the current plan to build more tanks.

Because about two years is needed to construct the necessary equipment to dispose of the contaminated water and to pass screening by the Nuclear Regulation Authority, a decision on disposal of the water was expected by this summer.

Since April, the government has conducted seven hearings involving local government officials, farming and fisheries organizations and business groups on the issue.

Central government officials have repeatedly said they would take responsibility to reach a conclusion as soon as possible.

But fishermen have long opposed dumping the contaminated water into the ocean. In June, JF Zengyoren, the national federation of fisheries cooperatives, issued a statement that said it was “absolutely opposed” to any method that did not gain public acceptance.

On Oct. 15, Hiroshi Kishi, JF Zengyoren president, met with Hiroshi Kajiyama, the economy minister, to pass on his organization’s opposition to the plan.

Before disposing of the contaminated water, the government plans to use ALPS for a second processing to lower levels of all radioactive materials except for tritium, a mildly radioactive isotope of hydrogen, under legal standards.

That water would be diluted with seawater to bring tritium levels below legal standards.

The government plans to monitor the environmental effects on the ocean after the water is dumped and disclose information about its findings.

During the series of hearings, officials pointed out that the government's compensation policy for dealing with negative publicity was insufficient and also indicated the need to properly transmit information to gain the understanding of people both in Japan and abroad.

Central government officials are also considering setting up another deliberative body to continue discussions with the Fukushima prefectural government and fisheries cooperatives to decide what further measures are needed over the issue.